According to the union, the strike is to press home their demand for the State Government to release the 2014 Professorial promotion and 2015 promotion of other cadres of academic staff of the institution and none gazetting of academic staff for the last 15 years.

Ndubuisi Idenyi, chairman of the union, said that apart from the release of the promotion, the union was also protesting the slashing of their monthly salaries by the State government.

He also called for the sack of Francis Idike, vice chancellor of the university, who he alleged have stayed beyond his stipulated tenure in office.

Idenyi said that before now, the union had planned to embark on a warning strike but after deliberations, the general consensus was for them to embark on a total and indefinite strike action which commenced today.

According to him, before the commencement of the industrial action, the union had written to the institution management informing them of their intention to embark on the strike.

He said:”But unfortunately all the demands we presented to the management, none was meet and we had no other option than to commence the strike action.

“We have eight point demand, one is the demand for gazzeting of the academic staff of the institution for the last 15 years, another is the Professorial promotion for 2014 and other caders for 2015 which government said the management are withholding, so we want it released immediately.

“Another is the defective EBSU law, there is no where in the world that the law we are using in the university is being operated where a Vice Chancellor will serve for 2 terms of 8 years each.

“What the law provided is a single term of 5 years, we want that to be enshrined in our own law and that we are demanding that it should be done immediately. I don’t know why they are finding it difficult to initiate this law so that things will move smoothly in the institution.”

Idenyi accused the present state government of being pretentious about most of the issues raised by the union especially gazzeting of the academic staff of the institution adding that the previous administration had approved the sum of 4.1 million for the printing of the gazzete which was to have been done in Enugu before the present government came on board.

He regretted that since the inception of the new administration, the Governor have continued to insist that the gazzeteing did not follow due process.

“He was the Deputy Governor when the approval was done. The government is simply paying lip-service to our plight”.

Reacting to government allegation of the institution being over staffed, Prof Idenyi insisted that there are minimum benchmark by the National University Commission NUC on the number of staff that each institution must have before the school would have accreditation.

“With the exit of many lecturers for greener pastures, the institution would loose accreditation if the lecturers were not replaced”.

Idenyi further stated that until all the demands are meet, the union would not shift ground and would resist any plan by the government to collapse the institution.

The ASUU chairman noted that the union is not scared of the threat of “No work, No pay” policy of the state government and urged the government to urgently do the needful.

When our reporter visited the College of Agriculture, CAS, campus of the school as well as Presco and Ishieke campuses of the institution, all the classrooms were under lock and key while some students were seen in clusters discussing the industrial action. 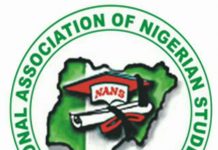