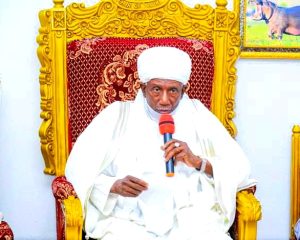 EMIR of Yauri in Kebbi, Dr Muhammad Zayyanu-Abdullahi, has lauded the Hydroelectric Power Producing  Areas Development Commission (HYPPADEC) for the planned rehabilitation of the Yauri waterworks at the cost of over N1.7 billion.

He made the commendation at the handing over of the site to the contractors for the commencement of the project in Yauri on Thursday.

”I am lost of words to express my happiness over this initiative  as he who gives water, gives life,” he said.

“Clean water has been our major challenge in this town and in a couple of months, it will be a thing of the past. We thank President Muhammad Buhari for this,”  Zayyanu-Abdullahi said.

The emir urged  the contractors to handle the project according to the  specifications and engage the local artisans and labourers for multiplier effect.

Zayyanu-Abdullahi said: “Within the last two years, HYPPADEC had executed a number of projects in the state which had improved the living standard of the benefiting communities.”

“We thank Buhari’s administration for inaugurating the commission and providing it with the enabling environment for its operations.”

In his remarks, the Managing Director of the commission, Alhaji Abubakar Sadiq-Yelwa, said the contractors were selected through a competitive bid by the  State Water Board and the  best won  the job.

According to him, the project is in nine phases and slots while it is expected to be completed within five months.

He urged the contractors to strictly adhere to  the contractual agreement, warning that the commission would not condone shady and substandard jobs.

”One major challenge of working in Yauri is, everyone in the community is a supervisor not only the Project Management  Committee.

“Yauri people will always talk when they see what they are not satisfied with, so do a good job in your own interests,” Sadiq-Yelwa said.

The MD expressed optimism that in five months time, HYPPADEC would be in Yauri to inaugurate and handover the water scheme.

He enjoined the members of the project management committee to abide by their oath undertaking to do the right thing and not compromise the set standards. (NAN).