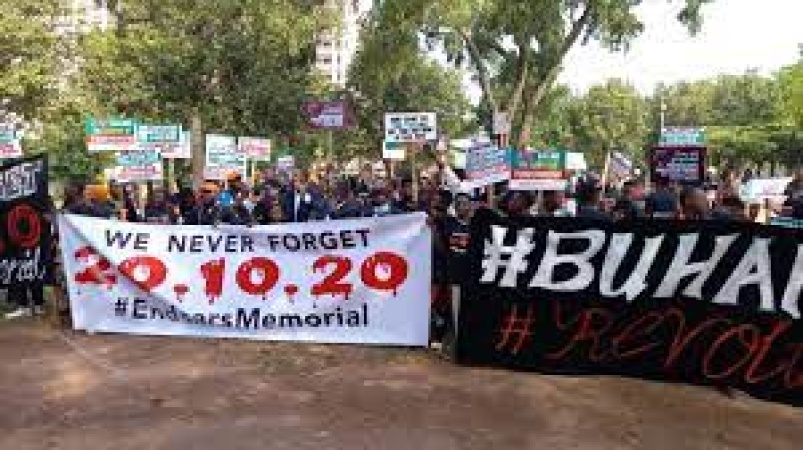 A year after the EndSARS protest, the devastation, and havoc wreaked in the wake of that ominous event on October 20, 2020, have remained fresh in the minds of many Nigerians.

The peaceful protest, which began on October 11, 2021, with protesters making a list of demands from the federal government, especially the urgent need to end police brutality -by scraping the Special Anti-Robbery Squad, SARS, a unit of the police supposedly notorious for harassing young Nigerians, extortion, unlawful detention, murder, among others, was finally hijacked by miscreants and the military was invited and they shot life bullets into the harmless crowd of peaceful protesters, killing many and leaving several others wounded.

Apart from the lives lost, the protest inflicted a huge dent on the nation’s economy and wreaked unimaginable havoc on security facilities.

The Lagos-based Financial Derivatives Company put the economic cost of the protest at N1.5 trillion, approximately 1.03 percent of the country’s GDP and 11.47 percent of the 2021 budget.

As Nigerian youths mark the anniversary of what is now regarded as the Lekki Toll Gate massacre, Nigerians once again took over the streets of Lagos, Osun, Abuja, Ondo, Benin, Illorin, Enugu, among others, in a peaceful protest to commemorate the memorial of the brutal killings of Nigerian youths by the Nigerian military, they would remember how the issues raised has not be addressed, how the panels set up in various states could not bring justice to most victims, and how the Nigerian military, the police and the government in the face of glaring evidence had continued to deny any involvement in the killings.

The youths are once again reminding the government of their strength in a united front, their ability to plan and execute that plan, and also their tenacity in their resolve to see a better Nigeria.

In solidarity with the lives lost on that fateful day, and as the epicenter of the incidents, youths in Lagos state on Thursday took the lead, trooping out in their hundreds, including popular celebrities took to the streets of Lekki to mark the brutal killings of innocent harmless protesting Nigerian youths. Demanding that the families of the Lekki victims should be compensated at least.

Realnews reports that the crowd of protesters was, however, dispersed by the police who threw teargas at them.

Confirming the incident, Hakeem Odumosu, Lagos Commissioner of Police said that he ordered his officers to fire teargas at the #EndSARS Memorial protesters in Lekki because they went against the promise that the procession would start by 8 am and end by 10 am.

According to the Nation, Odumosu had said that the action would prevent the breakdown of law and order, stating that any demonstration beyond the agreed time constitutes a nuisance and will not be tolerated.

“I discussed with them and they said they will end the protest by 10 o’clock. Other people doing it now are just causing a nuisance. Some with machete, hammer, are they protesters or miscreants?

“The protesters are free; they have done their thing and left. Any other persons remaining are the miscreants, hoodlums that want to capitalize on that to attack innocent people and start robbing people. We will not allow that,” he said.

The Daily Post reports that the aggrieved youths marking the one year anniversary of the #ENDSARS protests at Old Garage in Osogbo were also dispersed by policemen, who also arrested a journalist, Sikiru Obarayese.

The Nation reports that there was low turnout as youths stormed streets bearing placards and banners as well as chanting anti-government songs. The protesters marched from Ita-Olokan area through to Oja-Oba, Station road, post office, old-garage and Oke-Fia were attacked by the police at Oke-Fia and some of them were arrested.

There was heavy security presence within Akure metropolis as youths marched through the streets of Akure, the Ondo capital in support of the ENDSARS memorial protest.

The protesters, who submitted their demands to Commissioner of Police, Bolaji Salami, demanded the release of several ENDSARS protesters.

The youths in Edo State were not left out. they also converged at the Oba Ovonramwen Square, popularly called Ring Road, in Benin city with placards bearing various inscriptions, demanding for automatic employment for the victims of the protest in the state, demanding for the immediate implementation of the report of the judicial panel that was set up by the state government, requesting that all those still in detention as a result of the 2020 protest should be released unconditionally.

Security personnel drawn from the Nigerian Police, Department of State Services, DSS, Nigerian Security and Civil Defence Corps, NSCDC, and members of local vigilante were, however, on ground to ensure peace.

NAN reports that It was a pitiable sight when two of the victims, a fashion designer, Miracle Ailenokhoriah, who has been bedridden as a result of a gunshot to his right thigh, and Stephen Asekhame, whose left leg was amputated as a result of gunshot from soldiers in Auchi during the protest joined other protesters.

Asekhame, who is from Uhonmora, Owan West Local Government Area of Edo State, said he was amputated after he was hit by a bullet during the protest.

“During the protest last year on the 19th of October 2020, we in Auchi decided to hold our own peaceful protest, on that day and during the protest, soldiers ran into us and I was hit by a bullet that led to the amputation of my left leg.

“I was a student then, but now I am a graduate and I am supposed to go for service next Sunday.

“I presented my case before the panel through my lawyer, but till now, we have not heard anything from the panel,” he said.

One of the organisers of the anniversary rally, Kola Edokpayi, said: “I want the state government to implement the recommendations of the panel.

“The federal government should make the 20th of October every year, a public holiday to commemorate the EndSARS protest and give respect to the fallen heroes.

“These ones here who have been injured should be given automatic employment”, he added.

Down in the South-East, there was a very poor reflection of the EndSARS anniversary protest just like the IPOB had said. Many businesses were open as usual except in Enugu where some youths participated in the memorial.

Realnewsmonitored the Enugu event and it was a mixture of uncertainties as some youths took to the streets with placards to demonstrate the memorial of lives lost at the hands of police all over the country a year ago.

Kingsley Enenta, a resident in Enugu, said that the EndSARS memorial protest in Enugu took a different dimension unlike other states in the federation.

“It was a mixture of highs and lows in different locations like the metropolis had some few numbers of youths with their placards hashtagged #EndSARS.

“Due to the high level of insecurity in the southeastern states, I will say down here we had a mixed reaction of IPOB lockdown and EndSARS memorial protest,” he said.

Realnews, however, recalls that the federal government has reiterated that the military did not shoot at protesters and there was no massacre at the Lekki Toll Gate on Oct. 20, 2020.

According to Lai Mohammed, minister of information and culture, during a media briefing on the first anniversary of the “phantom massacre”, on Wednesday in Abuja, “The military did not shoot at protesters and there was no massacre at the Lekki Toll Gate on Oct. 20, 2020.

He stressed that the only ‘massacre’ recorded was on the social media, hence there were neither bodies nor blood.

“Today marks the first anniversary of the phantom massacre at Lekki Toll Gate in Lagos, which was the culmination of an otherwise peaceful protest that was later hijacked by hoodlums.

“At earlier press conferences, I had called the reported massacre at the toll gate the first massacre in the world without blood or bodies.

“One year later, and despite ample opportunities for the families of those allegedly killed and those alleging a massacre to present evidence, there has been none.

“No bodies, no families, no convincing evidence, nothing. Where are the families of those who were reportedly killed at the toll gate? Did they show up at the Judicial Panel of Inquiry? If not, why,” he asked.

Also of note is that one year after the federal government, through Mohammed Adamu, the then retired Inspector-General of Police, had announced the dissolution of the police formation, Special Anti-Robbery Squad SARS, the harassment which had subsided for only a while seem to be getting back through the Special Weapon and Tactics, SWAT, another seemingly more dangerous team that replaced the SARS.

Barrister Tope Temokun, leader of the protesters in Ondo State, has noted that issues, which led to last year’s protest were still much around.

According to him, “No police personnel or government official has been brought to book despite receiving assurances.

Temokun also called on the state government to begin immediate implementation of the recommendations of the End SAR panel.

Similarly, Osai Ojigho, director of Amnesty International Nigeria, has also said that the judicial panels of inquiry set up to investigate abuses of security operatives have made little progress.

According to him, “Under the pretext of restoring order, horrific injuries were inflicted on hundreds of people and at least 56 people were killed, among them dozens of young people lost their lives as Nigerian security forces used unnecessary and excessive force to disperse peaceful protesters across the country,” Ojigho said.

“It is unacceptable that despite overwhelming evidence, the government continues to deny the use of live ammunition on protesters at Lekki toll gate exactly a year ago.

“After reviewing videos and photos of the protest sites, Amnesty International found that in nearly 21 incidents where violence occurred between peaceful protesters and pro-government supporters, security forces not only failed to take preventive measures to avoid peaceful assemblies from being disrupted, but they also failed to protect protesters from violent attacks.

“In many instances, the police and other security agents watched as apparently government-backed armed thugs attacked peaceful protesters. In some cases, these thugs were brought to the protest sites in government vehicles. On at least two occasions, these attacks resulted in the death of protesters.

The Committee to Protect Journalists, CPJ, had also added that at least 12 journalists were attacked during the #EndSARS protests by security forces and unidentified perpetrators.

In the face of the numerous tension in the land, the federal government is demanding an apology from CNN, Amnesty International, and DJ Switch for “Misleading the world that there was a massacre at the Lekki Toll Gate on Oct. 20, 2020.

Realnews recalls that DJ Switch, whose real name is Obianuju Udeh, is a Nigerian Disc Jockey, DJ, who is on self-imposed exile over 2020 EndSARS protest and the Lekki toll gate incidence.

According to NAN, the minister of information and culture, demanded unreserved apology for portraying the Nigerian military, police and other security agencies in bad light.

Addressing newsmen on Wednesday in Abuja, the minister said: “CNN acted unprofessionally by relying on unverified, and possibly-doctored social media videos, as well as other open-source information to conclude that a massacre took place at the toll gate.”

He accused CNN of having no reporter on ground at the Lekki Toll Gate on Oct. 20, 2020, to be able to base its claims.