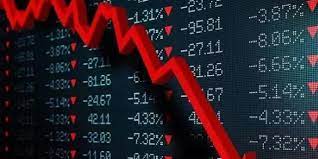 THE stock market closed on a bearish note on Tuesday as market capitalisation dropped by N25 billion or 0.09 per cent to close at N28.656 trillion, compared with N28.681 trillion recorded on Monday.

The weak performance of the market was largely driven by profit-taking in Zenith Bank, Guaranty Trust Holding Company (GTCO) and Nigerian Breweries stocks.

Consequently, the year-to-date (YTD) return fell to 2.66 per cent.

Mutual Benefits led the gainers’ chart in percentage terms by 10 per cent to close at 33k per share.

Conversely, Nigerian Breweries dominated the losers’ chart in percentage terms with 9.9 per cent to close at N41.85 per share.

Caverton Offshore Technology followed with 9.52 per cent loss to close at 95k per share while Champion Breweries declined by eight per cent to close at N4.60 per share.

Analysis of the market activities showed trade turnover settled higher relative to the previous session, with the value of transactions up by 171.53 per cent.