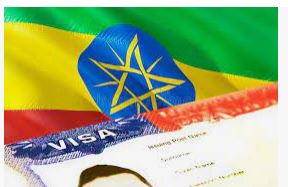 THE Federal Government says Ethiopia’s suspension of its “visa on arrival” to non-resident foreigners at all entry points is due to insecurity, especially regarding its current political situation.

The spokesperson for the Ministry of Foreign Affairs, Mrs Francisca Omayuli, said this in a statement on Thursday in Abuja.

The government, however, urged Nigerians intending to travel to Ethiopia to obtain appropriate entry visas at the country’s embassy or via an electronic visa (e-visa) through the country’s Immigration and Citizenship Service (ICS) portal at www.evisa.gov.et.

“The suspension applies to nationals of all countries bearing Standard Passports, who seek entry into Ethiopia and not specifically targeted at Nigerians.

“The Ethiopian authorities have explained that the measure is aimed at better border control of movement of persons into Ethiopia in view of the ongoing armed conflict in the Northern part of the country,” said Omayuli.

She further explained that the measure was temporary, pending improvement in the security situation in the country, and not a replacement of Ethiopia’s open visa policy.

She added that Nigerians transiting through Bole International Airport, Addis Ababa, Ethiopia, to other destinations or those who intended to stop over would require valid entry visa to enable them access hotel facilities in the city.

She said the temporary visa restriction came into effect on Sept. 29, and that the federal government would also liaise with the Nigeria Immigration Service (NIS) and relevant airlines to ensure intending Nigerian travellers enroute Ethiopia were sensitised.

“The general public is invited to take note of the new visa regime of the Federal Government of Ethiopia and be guided accordingly,” she added.

Omayuli also expressed government’s concern over the Ethiopian government’s worry over the abuse of the country’s visa policy by some Nigerians.

According to the Ethiopian authorities, some Nigerians who enter the country on tourist visas remain even after the expiration of their visas, engaging in unwholesome activities.

“The activities of these few elements not only tarnish the image of the country, but limit opportunities for well-meaning Nigerians outside the country.

“Such persons are enjoined to turn a new leaf and take advantage of the opportunity provided by the Ethiopian National Security Agencies to participate in the ongoing registration of undocumented migrants to avoid unpleasant situation,” Omayuli added. (NAN)