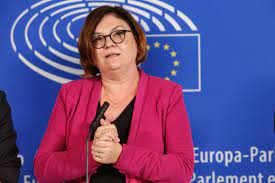 IN spite  of resumption of grain exports from Ukraine’s Black Sea ports under  UN,  Turkish-brokered deal between Russia and Ukraine. EU intended to continue its efforts to create alternative freight routes for Ukrainian grain exports.

In spite of the re-opening of maritime routes, an immediate return to pre-war levels of Ukrainian exports remained challenging and alternative export routes were still crucial.

The European Union (EU) Commission told the officials of dpa on Thursday.

EU Commissioner for Transport Adina Vălean stressed that there was room for improvement, in the alternative routes being worked on.

He cited a lack of freight wagons, barge operators and storage facilities for Ukrainian produce.

However, hopes were currently pinned on the agreement with Russia enabling a resumption of regular Ukrainian agricultural exports via the Black Sea.

According to EU figures, before the war, up to five million tonnes of grain passed through Ukraine’s Black Sea ports each month.

Reaching that level again in the near future was  considered highly unlikely, however, with the first ship to leave the port of Odesa under the UN deal carrying just 26,000 tonnes of maize. (dpa/NAN)