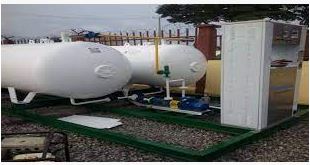 SOME residents in the Federal Capital Territory (FCT) have expressed worries over the indiscriminate location of fuel and gas stations in residential areas as it can endanger lives and property.

They expressed the fear in separate interviews with the News Agency of Nigeria (NAN) on Tuesday in Abuja.

They, therefore, called on government agencies, saddled with the responsibilities of issuing permits and regulating such, to ensure safety and prevent health hazards.

According to them, lives and property can be lost in event of any fire outbreak within such areas.

“Filling stations and gas plants should not be sited close to peoples’ homes. This is to avoid unforeseen circumstances like fire outbreaks, thus leading to the loss of lives and property.

“They should be situated in a place far from where people live,” he said.

Similarly, Mrs Henrietta Ezeugwu, a resident of Kubwa, said that the government should ensure that petroleum marketers abide by the rules and regulations governing petrol stations location.

“This is because anything can happen; we should not wait for it to happen before we do something as prevention is better than cure,” she said.

Mr Ebube Ikechukwu, a resident of Gwarimpa, said that the thought alone by individuals to site filling stations in residential areas was outrageous.

“I have heard about a lot of tragic explosions, where lives and property worth millions of naira were lost, because the filling station was built close to peoples’ houses.

“I think building filling stations and gas plants in such areas should be abolished by government to save lives and property,” he said.

On his part, Mr Julian Oforbuike, a final year medical student, said government should ensure compliance with regulations on the location of petrol stations.

Oforbuike said the carbon dioxide released from the generators used to supply energy in filling stations and gas plants was not good for people to inhale.

He said the carbon dioxide released from the generator could be very harmful to the residents, saying that it could cause kidney and lungs problem due to the inhaling of the pollutants.

“It can also cause asthma or cancer to the residents as well as make the environment unsafe for them,” he said.

He, however, suggested that there should be a good distance between the location of the petrol stations and the residential areas if such cannot be avoided.

“There should also be a working fire service station located around the stations,” he added.

Mr Joseph Ugwu, another resident at Utako, said the implications of building fuel stations in residential areas could not be overemphasised.

According to him, it is really disheartening that a company will build a fuel or gas station within residential areas not minding the risks involved.

Mr Opaja Opaja, a businessman at Dei-dei, said that building fuel or gas station in residential areas would not only cause fire outbreak, but could lead to environmental pollution. (NAN)