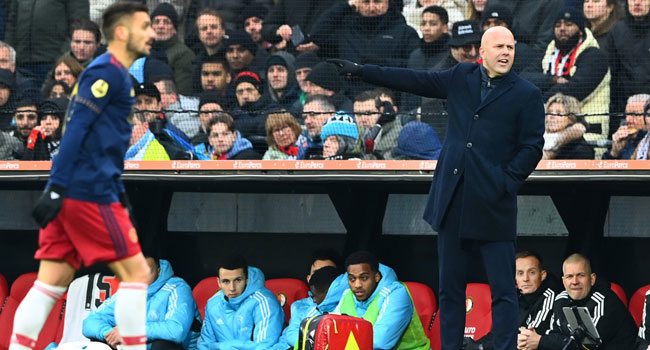 FEYENOORD reached the halfway point in the Dutch season top of the table Sunday despite drawing the “Klassieker” 1-1 at home against defending champions Ajax Amsterdam.

The Rotterdam club, who last won the title in 2017, top the Eredivisie with 38 points, two ahead of AZ Alkmaar with PSV Eindhoven one point further back.

Ajax are lagging in fifth on 33 ponts, just behind Twente.

On Sunday, Arne Slot’s Feyenoord missed the opportunity to further widen the gap on their old rivals.

The home team took the lead with a superb shot from Brazilian winger Igor Paixao after 34 minutes but were pegged back in the second half by a goal from Dutch international Davy Klaassen.

Ajax have not won in the league since October 22 and were knocked out of the Champions League in the group stage.

Alfred Schreuder, who joined from Club Brugge to replace Erik ten Hag as coach, has faced criticism in recent weeks after a chaotic start to their title defence.

Yet Ajax are going through a transitional season after a hectic summer in which they sold 200 million euros worth of players and spent barely half that on replacements.