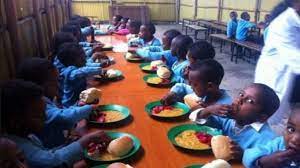 THE National Orientation Agency (NOA) has disclosed that the Federal Government was committed to increasing the beneficiaries of the National Homegrown School Feedimg Programme in Ebonyi.

Dr Desmond Onwo, Director, NOA in the state, disclosed this while speaking with the News Agency of Nigeria (NAN), on Friday in Abakaliki.

Onwo explained that the programme would get to all the public primary schools across the 13 local government areas of the state.

“That is, primary one to three pupils. We are embarking on a sensitisation campaign to ensure that people from the Grassroots are aware of the scheme.

“We shall be meeting with the critical stakeholders in the state, including the traditional rulers, market women, parents and even teachers, among others.

“Some schools have been captured in the 13 local government areas by the enumerators and the government is trying to increase the number of beneficiaries so that it gets to all the public primary schools,” he said.

The director explained that the essence of the programme was to deliver school feeding to young children with a specific focus on increasing school enrollment, and reducing the incidence of malnutrition.

“The scheme will help promote nutrition, education and better eating habits and also encourage the diversification of production with a special emphasis on local crops.

“It is a Federal Government funded initiative; it was introduced by President Mohammadu Buhari in 2016.

“It is free for all the beneficiaries. The objective is to improve the nutritional and health status of primary school children.

“It will also boost the income of farmers and provide empowerment opportunities for women,” he further said.

Onwo explained that the programme had created significant economic impacts on local agricultural production, benefited communities and the children.

“We urge parents and all stakeholders to support us in the awareness campaign to ensure that the messages got to the people, especially the rural dwellers,” he added.

NAN recalls that the Federal Government had in 2021, promised to enroll more than 67,307 primary school pupils into the programme in the state.

The government in 2021 also said the programme would capture about 561 public primary schools across the 13 local government areas in the state, covering primary one to three in public schools. (NAN)