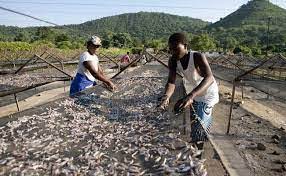 THE Federal Co-operative College, Oji River in Enugu State, Wednesday, began the disbursement of funds to 500 persons to start fish production and marketing in Abia.

The beneficiaries received the stipend at the end of their three-day entrepreneurship development training in fishery in Umuahia.

The News Agency of Nigeria (NAN) reports that the programme was facilitated by Rep. Sam Onuigbo, representing Ikwuano/Umuahia North/Umuahia South Federal Constituency, for his constituents.

Onuigbo described the programme as a continuation of his commitment towards empowering the unemployed youths and unskilled women in the constituency.

He said that the first batch of 250 beneficiaries received N50,000 to set up their farms.

He also said that the remaining beneficiaries would receive the same amount between Thursday and Friday.

Onuigbo, represented by his Chief Liaison Officer, Mr Abraham Osundu, said the beneficiaries were trained in different aspects of fish production and marketing.

“The objective is to help them set up a means of livelihood and make income for themselves,” he said.

He advised them to utilise the money judiciously to grow their businesses and contribute meaningfully to society.

“This is neither party time nor bonanza.

“The journey of 1,000 miles starts with a step, so you should use the money wisely,” he said.

The beneficiaries thanked the Federal Government and lawmaker for the gesture and promised to make the most of the opportunity.

One them, Mrs Glory Oruh, gave assurance that she would invest the money in the fish business.

“The money is not too much but I will start the fish production in a basin, after which I hope to expand it.

“Hon. Onuigbo has been doing this empowerment for so many people.

“This is my first time and I pray that God will bless him,” the visibly elated lady said. (NAN)