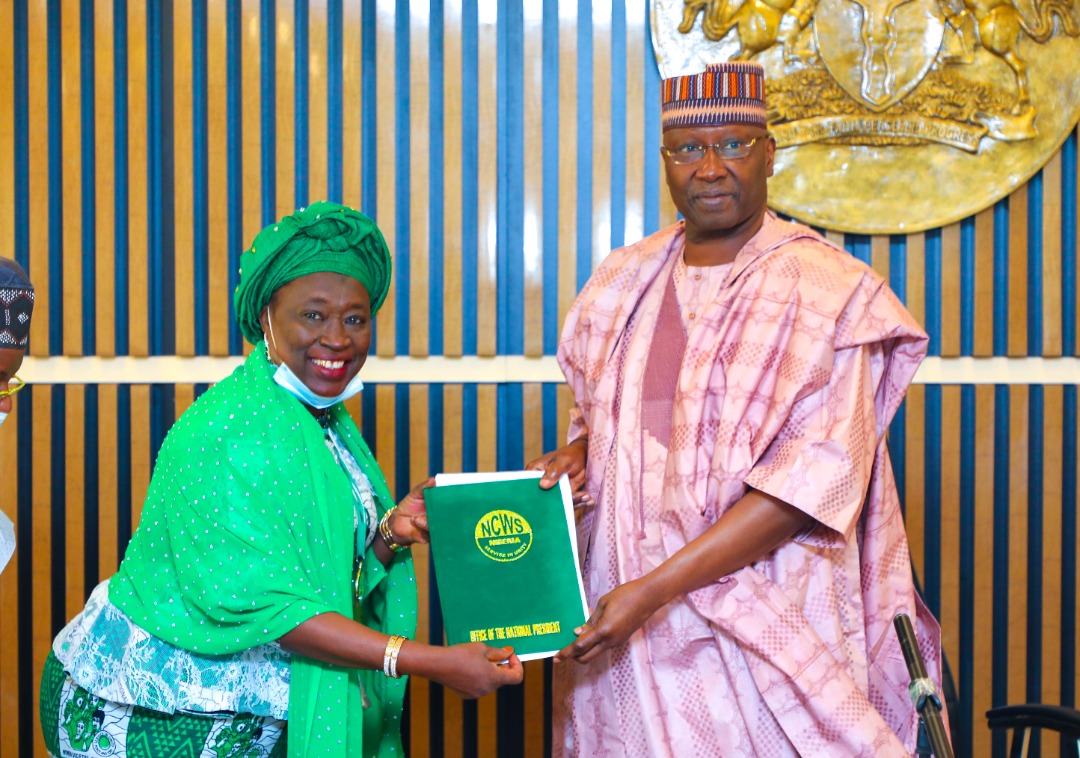 THE Federal Government has re-affirmed its commitment to support women through the enabling legislative and institutional framework that would ensure the protection of their rights.

Boss Mustapha, secretary to the government of the federation, made the pledge when the leadership of National Council for Women Societies (NCWS) in company with the Committee on Women-in-National Service Week (WINSERVE 2022) led by its President, Hajiya Lami Adamu Lau, paid him a courtesy call in his office.

Mustapha said that with proper enabling legislations and institutions, the rights of the women and children would be adequately protected. In his words:
“I believe that this partnership would help in implementing the United Nations Resolution on Gender and Affirmative Action and those of the SDGs; so that we can ensure that the rights of women and children are adequately protected and institutions that will ensure that these things are implemented”.

He commended the partnership between the National Council for Women Societies (NCWS) and FGN NIMEC Project office in tackling the hydra headed challenges that are being presently faced like gender violence, drugs and other substance abuse, the cases of out-of-school youths and other related social vices.

He added that the partnership will go a long way to alleviate the plight of women and children who are among the most vulnerable in the society.

He showered encomiums on women who are making the nation proud in the global scenes with the examples of the Director-General of World Trade Organisation (WTO), Ngozi Okonjo Iweala; the Deputy UN Secretary General, Amina Mohammed; Tobi Amusan, who won a gold medal for Nigeria in a recent World Championship in Oregon, US; amongst others.
He further assured the NCWS of government’s readiness to render support toward the success of the Women-in-National Service Week (WINSERVE 2022).

Earlier, the President of the National Council for Women Societies (NCWS), Hajiya Lami Adamu Lau congratulated the SGF on the giants strides he has achieved as SGF and the Chairman of the Presidential Steering Committee on Covid-19 which earned him the prestigious award of National Productivity Order of Merit (NPoM) award.

Hajiya Lau sought government’s support to speed up the process of implementing the United Nations Resolution on Gender Affirmative Action (Beijing 95) and the UN-Sustainable Development Goals (SDGs). She added that it’s their acceptance to co-host and co-organise the forthcoming Women- In-National Service Week (WINSERVE) was borne out of determination to ensure the promotion and defence of Women’s and Children’s Rights, in all ramifications.

Also, the director and Head of FGN Projects of the Implementation Committee, Federal Ministry of Finance Budget and National Planning, Dr. M.A Yakassai, highlighted the lines of events during the forthcoming Women- In-National Service Week (WINSERVE) event which includes the National Colloquium on Gender and National Development, the Presidential Dinner Award which would confer national awards on prominent Nigerian women and former First Ladies of the Federal Government of Nigeria, who have made great impacts through their lofty pet projects, amongst other activities.