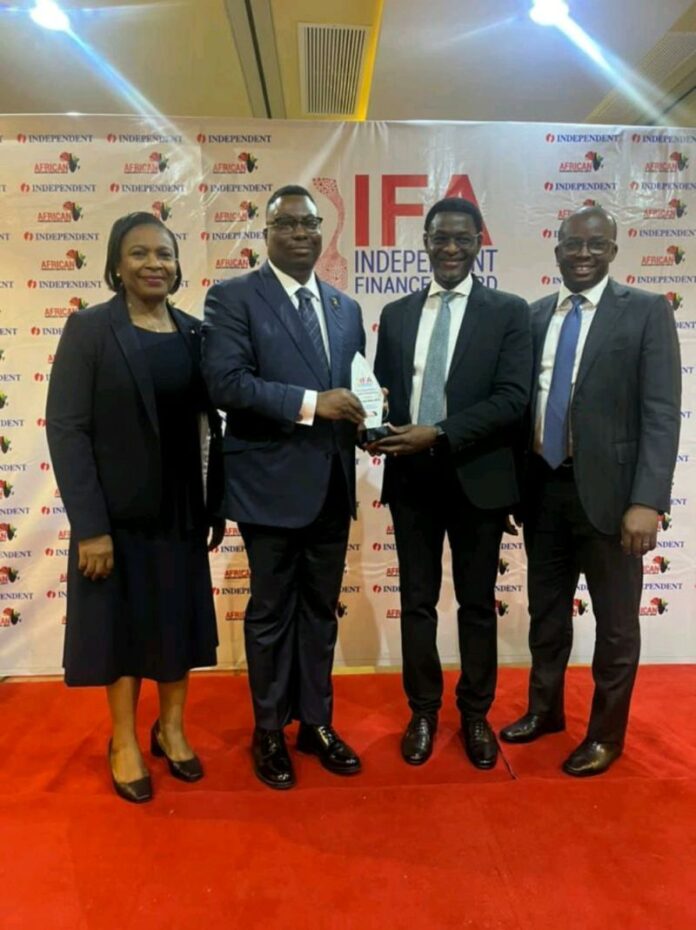 FIRSTBANK of Nigeria Limited has received the award for “Best Bank in Support of the Manufacturing Sector” at the Independent Finance Award.

Independent Newspapers on Friday night in Lagos recognised and cele­brated some financial institutions and individuals for their contribu­tions to the innovation and inspira­tional changes in the nation’s banking and finance sector.

The maiden edition of the Inde­pendent Finance Award, organised in collaboration with Africa Consoli­dated Analytical Limited, had as the theme, ‘Nigeria’s Economic Advance­ment: Will RT200 be an Economic Game-Changer?’

The event was borne out of the need to provide a platform of en­gagement for players in the banking and financial services sector, policymakers in government, and investors.

Winners of the various categories included 128-year-old First Bank of Nigeria Limited, which received the Independent Best Commercial Bank in Support of Manufacturing.

Mr. Oluwatosin Adewuyi, the Ex­ecutive Director, Corporate Banking, at FirstBank, who received the award, noted that the bank has remained a great believer in the importance of ex­port earnings by government, hence its embrace of the RT200 initiative, where it is a major player, among others.

Adewuyi, who also received the In­dependent Commercial Bank CEO of the Year Award, on behalf of Dr. Ades­ola Adeduntan, his CEO, recalled how officials of the bank “are always on the road advising potential exporters, because we believe in the initiative as way of growing the economy,” expressing appreciation to the award organisers on behalf of the board, management and staff of the bank.

The Independent Mortgage Award was received on behalf of Living Trust Mortgage Bank Plc by Olumide Adedeji, Executive Director/representa­tive of the Managing Director, who described it as “a special award,” thanking the organ­isers for recognising the bank’s little contribution to joining the search for a solution to the na­tion’s housing deficit.

He dedicated the award to the company’s customers for their contributions to building the brand.

Receiving the Independent Micro Finance Bank of the Year Award on behalf of Ac­cion Microfinance Bank Lim­ited, Adefisayo Akinsanya, Head of Marketing Communi­cations, said the recognition of the company’s humble contribution is an encourage­ment to remain committed to empowering and supporting the financial services sector.

In a keynote presentation on the award theme, Assistant Director, Trade and Exchange, Central Bank of Nigeria (CBN), Richard Maikai, who represented the director, Dr. Ozoemena Nnaji, used the occasion to further sensitise the public on the CBN’s RT200 policy, stressing that “Nigeria’s forex market is challenged,” and unable to meet the grow­ing demand.

He, however, noted that with the commencement of the RT200 policy, there has been an improvement in forex inflow, which is visible in the huge in­crease in the number of non-oil export operators that filed for the FX rebate in the first two quarters of the year.

“The request for the rebate which initially only started with seven banks has almost all the banks that facilitate export transactions making submissions on behalf of their customers,” he stressed.

As part of the apex bank’s desire to further promote the policy, Maikai announced that the second edition of a summit on the policy will hold in Lagos on November 29, to once again sensitise the public on the need to diversify the economy away from oil, while continuing to showcase the vast opportuni­ties in the non-oil export sector.

The CBN, he said, has over the years, been grappling with a rising demand for FX, warn­ing that the ensuing pressure remains a strong domestic headwind, hence the need for policy initiatives. One of such, he continued, is the Investors & Exporters window estab­lished by the CBN in April 2017, to boost liquidity in the FX market.

In a goodwill message, the Registrar/Chief Executive of the Chartered Institute of Bank­ers of Nigeria (CIBN), Dr. ‘Seye Awojobi, described the eventas a wonderful initiative by Indepen­dent Newspaper sat time when it is uncommon in our clime, because “Nigerians celebrate people when they are dead. But the Independent Newspapers is changing the narrative today to celebrate, rewardand commend the achievements of people and players in the financial services sector.”

He assured that the CIBN is happy to identify with the awardees, all of who are corpo­rate and individual members of the institute, as well as Inde­pendent Newspapers Limited.

Speaking on the keynote speech, Awojobi, who was rep­resented by Akin Morakinyo, Deputy Registrar at the insti­tute, noted the importance to­day of ensuring that the RT200 policy of the CBN achieves its objective for the good of the nation and the economy, which is why, he said, the CIBN also made a focus at its just con­cluded Annual Bankers’ Con­ference held in Abuja.

“There is no better time than today for Nigerians to unleash the prosperity of their country”, he said.

The award ceremony was also attended by Prof. Ahmed Kurshe, Registrar/CEO of the Institute of Chartered Ac­countants of Nigeria (ICAN), who gave a goodwill message, among other stakeholders in the nation’s banking sector.