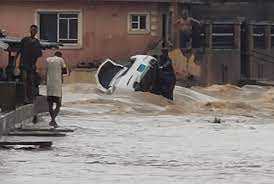 THE Nasarawa State House of Assembly has called on the Federal Government to provide relief materials for victims of recent flood disaster in the state.

The Speaker of the House, Alhaji Ibrahim Abdullahi, made the appeal after Alhaji Tanko Tunga, the Majority Leader, raised the issue under matters of urgent public importance at plenary in Lafia on Monday.

Abdullahi said that the devastated effect of flooding across the state was colossal, hence the need for the intervention.

He said that such support would ameliorate effect of the disaster that wreaked havoc in many communities across the state.

“I want to use this medium to appreciate Hon. Tanko Tunga and all members for your contributions on this subject matter.

“I am also directly affected as 50 per cent of my people are living in riverine communities.

“The devastated effects of flood are huge across the state as many lives, animals, buildings, farm lands, among other properties, are destroyed.

“Many communities across the state affected by the flood are homeless, they are no longer living in their homes,” he said.

The speaker said that because of the effects of flood on the people, he is appealing to the state and federal governments to urgently provide relief materials to the victims.

“I also want to call on the state government to relocate communities affected by flood to a safer place for their comfortability and to improve on their standard of living,” he said.

He however advised the national and state emergency agencies, Nasarawa Urban Development Board (NUDB) and the National Orientation Agency to be more proactive in their duties.

According to him, people should be sensitised on the dangers of flooding and ensure proper development control across the state.

In his contribution, Mr John Osewu (APC- Doma South) lamented how flood destroyed houses and properties especially among his constituents, rendering them homeless.

He also called for proper funding of NASEMA and urged NUDB to ensure proper development control in the state to avoid flooding.

Earlier, Tunga who raised the issue, said that the 2022 flood appeared to be worst.

“This year’s flooding has inflicted injuries on the lives of many people across the state.

“It has caused a lot of damages to people, destroyed houses and farmlands, even properties were also destroyed.

“I want to call on the government to see how it can alleviate the suffering of the flood victims across the state,” he submitted. (NAN)