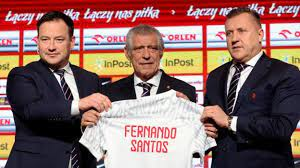 Santos led Portugal to European Championship glory in 2016 and was at the helm for eight years until his reign came to an end after the 2022 World Cup in Qatar.

“It is a great honour for us because we are talking about a great country, with an extremely rich history and culture,” Santos told a press conference in Warsaw.

This was after he signed a contract to be in charge for the Euro 2024 and 2026 World Cup cycles.

“Polish football also has a history that has marked my generation.

“The national team has many players of great quality. It is among the best in the world. From today I am a Pole, I am one of you.”

Santos was appointed after former Rangers and Aston Villa manager Steven Gerrard had been heavily linked with the role.

Poland had been looking for a new head coach after deciding not to renew Czeslaw Michniewicz’s contract following their round-of-16 exit at the World Cup last month.(dpa/NAN)