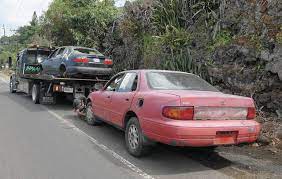 Abandoned vehicles on the road

THE Federal Road Safety Corps (FRSC) has directed its commanding officers across various formations to ensure that all abandoned and broken down vehicles are removed from highways.

The FRSC Public Education Officer, Mr Bisi Kazeem, made the disclosure in an interview with the News Agency of Nigeria (NAN) on Friday in Abuja.

Kazeem said that the corps was committed to removing abandoned and broken down vehicles from highways to avoid traffic obstruction.

He noted that removing articulated vehicles was more difficult than removing smaller vehicles but said that the FRSC was working daily to clear all road obstructions.

The spokesman said that the corps had tow trucks in most of the states to facilitate the removal.

“As at today, the corps has 28 tow trucks in 23 states of the federation and the Federal Capital Territory, Abuja.

“In states where we do not have, commanding officers leverage on public/private partnership to ensure swift removal of obstructions.

“The tow trucks are mainly in state capitals,” he said.

According to him, if a vehicle is burnt or damaged to the level that  tow trucks cannot drag it off the road, the corps will use other means to remove  such a vehicle.

“The corps understands the dangers of not removing broken down vehicles from the roads,” he said.

He noted that President Muhammadu Buhari had approved procurement of more tow trucks for the corps.

“These tow trucks have been inaugurated and deployed to various formations across the country.

“With these additional facilities, rest assured that you will notice a great improvement in our operational activities including prompt removal of obstructions,” he said. (NAN)