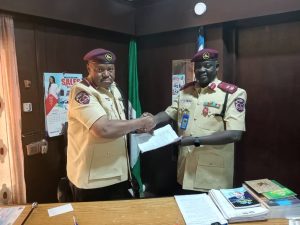 From L-R is the outgoing Acting sector  Commander Mr Lawal Garba present handing/taking over note to the new Sector Commander Zubairu Mato on Wednesday in Kaduna.

The new commander, until his deployment, was in charge of Kano State Command.

The News Agency of Nigeria (NAN) reports that the former acting sector commander has been posted to Jigawa State as the Deputy Corps Commander Operations.

Garba in his farewell massage to the personnel during the handing and taking over, charged the personnel to be dedicated to work.

He appealed to the personnel to render similar support given to him when he was the acting sector commander.

He told them that he needed their maximum cooperation for the new sector commander to achieve the mandate of corps.

He thanked the Corps Marshal for giving him the privilege to head the command for six months.

The new officer urged the personnel to extend the support given to his predecessor.

Mato said, “My plan for the state is to ensure free flow of traffic along  all our highway.

“I will ensure that there will be traffic control security watch all over the state, I will also ensure we patrol the highway effectively and efficiently to reduce carnage on our highways.

Mato reassured of continued synergy among the agencies in the state.

‘We are going to provide days of vehicles checking whenever the need arises for investigation purpose, so that stolen vehicles can be tracked easily in the state,” he said.

He charged the personnel to redouble their efforts in reducing road crashes across the state  whie life and property are saved. (NAN)