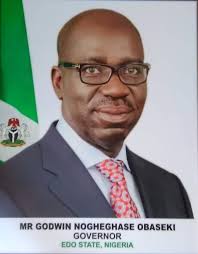 The Edo State Governor, Mr Godwin Obaseki, has called on political leaders to work towards delivering good governance and set up institutions to engender social justice for the betterment of society.

The governor made the call in commemoration of the Nelson Mandela International Day, marked on July 18, each year by the United Nations.

In line with the 2019 theme of the commemoration, “Take Action; Inspire Change; Make Every Day a Mandela Day,” he urged political leaders to use the Nelson Mandela International Day to reflect and implement policies aimed at addressing issues that deprive people the opportunity for decent, equitable living.

According to him, “As we commemorate the International Nelson Mandela Day, it is pertinent to note that the actions and inactions of political leaders contribute to issues relating to global health, security, food security, climate change, infrastructural deficit, amongst others. That a number of developing countries have been unable to lift millions out of poverty is a testament to the fact that we have not addressed key issues of social justice.

“As the world celebrates the legacies of Nobel Peace Prize winner, Nelson Mandela, political leaders in developing countries can do more for their people if they take actions to enhance the wellbeing of majority of the people. Just as the great Mandela, we can achieve more for our people if we are selfless in ensuring equitable distribution of the state’s resources to foster peaceful living.”

According to the United Nations, “Nelson Mandela devoted his life to the service of humanity – as a human rights lawyer, a prisoner of conscience, an international peacemaker and the first democratically elected president of a free South Africa.”

The organisation urged everyone to mark Nelson Mandela International Day “by making a difference in their communities as everyone has the ability and the responsibility to change the world for the better. Mandela Day is an occasion for all to take action and inspire change.” (THE NATION)

How best to prevent pregnancy

Theater for development can assist in ending violence against children — expert

Actress Kate Henshaw condemns use of bleaching cream on kids

What You Should Know About Pneumonia