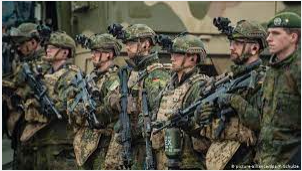 A reserve officer of the German Armed Forces is standing trial for allegedly passing sensitive information to the Russian foreign intelligence service ,GRU, between 2014 and 2020.

The 65-year-old is standing trial on Thursday at the Dusseldorf Higher Regional Court, and if convicted, he faces up to a decade in prison.

According to the indictment, the man from Erkrath near Dusseldorf, betrayed information on the inner workings of the Bundeswehr’s reserve system and on civilian-military cooperation in crisis situations.

However, the information is also said to concern the effects of the sanctions imposed on Russia in 2014, following the annexation of Crimea and the Nord Stream 2 Baltic Sea pipeline, a project that was halted following Russia’s invasion of Ukraine in February.

According to the indictment, the documents and information came partly from public sources, but also from non-public sources.

As a motive, the Federal Prosecutor’s Office suspect’s “sympathy for the Russian Federation.’’ They have not been able to establish any monetary payments.

Meanwhile, the defendant had attracted attention because he had been invited to official events of Russian authorities.

He had already made a partial confession during the preliminary proceedings, a court spokeswoman said. (dpa/NAN)