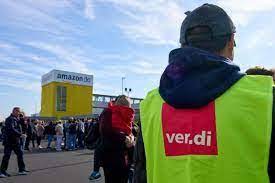 Verdi is reiterating demands for improved pay for workers and for Amazon to recognise the deals it reaches with other employers in the retail sector.

However, Amazon and Verdi have long been at loggerheads over recognising the trade union in the company’s distribution centres.

Meanwhile, Amazon has rejected Verdi’s criticism, pointing to starting wages including bonuses of at least €13.00 ($13.50) per hour.

Greenpeace have accused Amazon of incentivising excessive consumption, refuse from packaging and the waste of resources.

Demonstrators held up a banner reading: “Black Friday: Destruction of Nature as Business Model,’’ at the company’s headquarters in Munich.

Amazon points to its efforts to cut pollution and CO2 emissions by shifting to electrically powered delivery vehicles among other measures. (dpa/NAN)