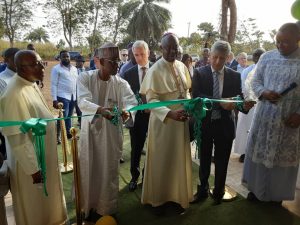 The News Agency of Nigeria (NAN) reports that the park is being executed in collaboration with 50 European companies from Germany and Austria.

It is being located at the main campus of GOUNI at Ugwuomu Nike, Enugu.

Speaking at the event, the Vice Chancellor of GOUNI, Prof Christian Anieke, said that students of the University and college who were influenced by European sense of duty, punctuality and perfection would be completely different upon graduation.

“With these projects, the International Centre for Migration Policy Development (ICMPD), the private investors, the German and Austrian governments have built a long bridge of human interaction and development, connecting Europe and Nigeria in a fascinating fashion,”.

The Vice Chancellor noted with appreciation that the investors deterred rumours of insecurity and other allegations and were inspired as well as motivated by the gospel of brotherhood of humanity.

In a paper entitled “From A Jungle To A Catholic University, GOUNI-European Business Park and Centre of Practical Skills: The Story of This Main Campus” Anieke said the campus was an uninhabited jungle with countless varieties of animals and plants.

“There was no road but the footpaths of humans and predatory animals. It was a very dreadful place. For the rural communities of Ugwuomu Nike and Nkwubor, it was a place inhabited by gods and terrifying spirits.

“The two lakes here inspired deep fear as they were believed to be housing water spirits and frightening gods.

“The rural people also appeased the gods with various sacrifices of animals and incantations and had alternatively made gods of stones and trees around,” Prof Anieke stated.

He explained that the area which was later turned to a Catholic Diocesan farm was now an enviable campus for youths training and development.

The Vice Chancellor lauded Dr Andreas Gebauer, an Austrian whom, he said, transformed the thick forests in the Business Park and center of Practical Skills into a wonderful environment.

Speaking also, the Director General, ICMPD, Dr Michael Spindelegger, announced that the organisation has 90 projects in different parts of the world and reaffirmed the determination of the management to support the activities of the University.

“This is the first time to march Skills and knowledge and this is a story of a new beginning taking place in the University,” Rasheed said.

The Proprietor and Promoter of GOUNI, Bishop Callistus Onaga, described the Business Park and college of practical Skills as the best evangelism to rescue the nation’s education, which he observed, was going down the drain.

Onaga, who is the Catholic Bishop of Enugu Diocese, commended Anieke for leading the revolution to transform the nation’s dwindling education.

In a special remark, the Executive Director Globethics.net Geneva, Monsignor Obiora Ike, expressed dissatisfaction over the neglect of the South-East by the federal government and called on more European companies to invest in the state.

Ike praised the VC for transforming the former diocesean farm to an enviable place for education and industrial activities.

NAN also reports that about 100 students of the college of practical Skills have commenced training in electrical, plumbing and masonry .