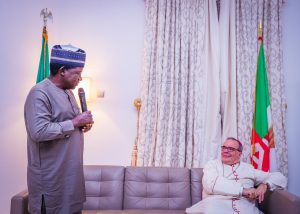 Gov Simon Lalong of Plateau with the Papal Nuncio to Nigeria, Arch Bishop, Anthonio Phillipazi, during his courtesy visit to the governor, on Monday at Government House Jos

GOV. Simon Lalong of Plateau has restated his commitment to partner with faith-based organisations to improve education in the state.

The governor told the Papal Nuncio to Nigeria, Arch Bishop, Anthonio Phillipazi, who visited him that the commitment led to his administration handing over of all missionary schools to their original owners.

He acknowledged the critical role the Catholic Church played in Nigeria’s education sector and stressed that it helped in building solid foundation, integrity and honesty.in the sector.

Lalong told his visitor that his administration’s determination on peace-building also led to the creation of the Annual Day of Forgiveness in the state.

He explained that day is marked with continuous prayers and advocacy for reconciliation, forgiveness, tolerance and fighting crime in the state.

Responding, the Papal Nuncio thanked the governor for the honour bestowed on him and his team, saying he was in Plateau to inaugurate a new building at St. Augustine Major Seminary, Jos. (NAN)