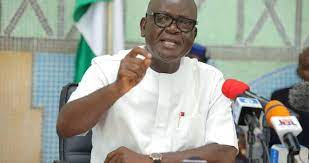 GOV. Samuel Ortom of Benue on Saturday charged National Assembly members of the state’s extraction to revisit a contract awarded by deceased President Umaru Yar’Adua for the dredging of River Benue, but was not executed

Ortom gave the charge in Makurdi after he inspected areas submerged by flood.

He charged the law makers to join forces and make a case for Benue, lamenting that the contractor had not done anything since the contract was awarded.

“The contractor has done nothing, yet he is not brought to book. Our people keep suffering because the river is not dredged.

“Find out the status of the contract; why has it not taken off? If you do that, you will do the state a lot of good,’’ Ortom said.

He stressed that Benue communities would continue to suffer from flooding until the River Benue is dredged.

Earlier, the Executive Secretary, State Emergency Management Agency, Dr Emmanuel Shior, said that the agency had profiled the victims and started the supply of relief materials to them.

Shior said the agency had supplied relief materials to 24 communities displaced by the flood. (NAN)