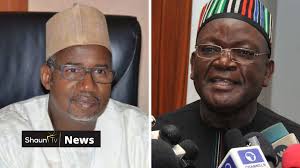 GOVERNOR Samuel Ortom of Benue State and Governor Bala Mohammed are still at daggers drawn over the crisis involving herders and farmers in the country.

Mohammed fired the first shot at Ortom last week when he said that the governor of Benue was the one instigating violence against the herders. Returning his own salvo, Ortom described Mohammed as a terrorist.

Mohammed’s statement came in the wake of eviction orders given to herdsmen, who carry AK47 and were also accused of kidnapping, killings, and raping of women in the South West.

According to Mohammed, it is not the fault of herdsmen that they carry AK47. Herdsmen need the AK-47 rifles to defend themselves from cattle rustlers and other challenges encountered on the road.

“It is not their fault, it is the fault of the government and the people,” he said.

Mohammed condemned the treatment of Fulani herdsmen, especially in the southern region, noting that the whole tribe should not be criminalized for the actions of some of them responsible for deadly attacks.

Specifically, he accused Ortom of starting a wave of anti-Fulani sentiment, adding that his own state has been accommodating to all tribes from across the country, unlike the treatment Fulani people are facing in other parts.

Prior, to his statement, Ortom has lamented the actions of the herders which has scared the farmers from going to the farm. He had said that amidst the outcry of the menace of herdsmen, President Muhammadu Buhari did not stop it. According to him, the president is that of the Fulani and not of the whole of Nigeria.

Reacting to allegations of Mohammed, Ortom wondered why he should support Fulani herdsmen carrying AK-47 rifles, an action that is against the 1999 Constitution (as amended).

Ortom told journalists in Makurdi, Benue State capital on Monday, February 22,  that Mohammed must be a terrorist for supporting illegal arms-wielding foreign herdsmen.

“I wouldn’t want to be joining issues with my brother, friend, and colleague Bauchi Governor. But since he has continued to vilify, intimidate and blackmail me, it is said that silence is consent. I am compelled to respond to him.

“I am beginning to think that my brother, the governor of Bauchi State, is part of the terrorist Fulani organization that is terrorizing this country. Why do I say this? This is the same governor who took the oath of office to protect the constitution of the Federal Republic of Nigeria. This constitution does not leave room for allowing foreign herdsmen to come in without valid papers.

“This is a man who says that a Fulani man is a global man and can come in from anywhere and enter Nigeria. It is quite disappointing to hear a governor who took the oath of office saying that. He should go back and check the oath of office he took maybe the constitution gives room for foreign terrorist Fulani herdsmen to come into Nigeria,” Ortom said.

Realnews reports that the herder farmers conflict has generated so much tension in the polity and it appears to be worsening giving the altercation between the two governors.