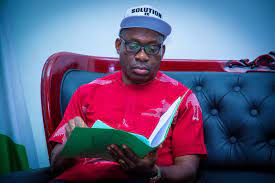 MR Don Onyenji, Commissioner for Culture, Tourism and Entertainment in Anambra, said that, in an attempt to revamp and sustain the Entertainment Industry in the state, the government has earmarked the sum of N2.5 billion for youth development.

Onyenji made the disclosure on Wednesday in Awka during the maiden edition of “Anambra Entertainers’ Meet and Greet” event.

He said that the Event was tagged “Revamping and Sustaining The Entertainment Industry in Anambra State”.

The Commissioner said that the essence of the event was to profile all Entertainment personnel, dancers,  models, comedians, film markers, influencers, and hypemen amongst others in the state.

He said that the move is to engage home-based youths who are good in the Entertainment industry and to know their potentials for possible empowerment.

“We need to harness the talents of our youths and engage them meaningfully to be able to stand economically and otherwise.

“Anambra has huge potentials amongst its youths. These are untapped and we have resolved to create opportunities for them to advance positively and get the needed support to thrive in their passion.

The Commissioner said that the economy belongs to the youths, and explained that the Governor has great value for youth development.

He said that the government, through tourism and entertainment industries, has vowed to create the enabling environmental grace to ensure that every youth showcases his/her talent right.

Onyenji said that the government has various projects planned to make Anambra State conducive for entertainment and tourism.

The Commissioner said that the security challenge in the state is being handled by the Charles Soludo administration which is committed to tackling insecurity head on.

In his address to the participants, the Speaker of the Anambra State House of Assembly, Mr Uchenna Okafor, assured the participants of the commitment of the government to tackling insecurity in the state.

He also noted that the government is bent of promoting talents, citing the proposed Leisure Park that will be built in the state soonest, as a good facilities for the youths.

Okafor also disclosed that the newly-created Anambra Broadcasting Service (ABS) FILM Village is part of what the government is doing to promote the film industry in the state.

In his contribution, Mr Nonso Arinze, the representative of the Commissioner for Youth Development, urged the youths to key into the programmes and policies of the Anambra government.

Arinze said that the government has set up many developmental Projects for the youths and reminded them of the one youth, two skills programme aimed at making Anambra youth self-reliant.

He said if the youths are good in what they do, the state government will help propel them to greater heights.

Earlier in his remarks, the lead planner of the event, Mr Chukwuemeka Nnaemezie, said the event was to promote the entertainment industry in Anambra State.

Nnaemezie advised the youths to be conscious of their own actions and revealed that subsequent events will be done as the government is a very inclusive one.

The Managing Director of ABS, Chief Chido Obidiegwu, assured the participants of the support of the station in projecting their activities to the public domain.

Obidiegwu encouraged the youths not to be in a hurry to put out any thing out for public consumption but to have quality content that would be saleable.

Mr Marcel Manafa, one of the dignitaries that graced the occasion which featured creative performances at intervals, advised the youths not to relent in their creative art.

Manafa said that the present government was determined to launch talented youths to greater heights and advised them to key into the process.

Mrs Adaora Chukwudike, a film marker, commended the ministry of Culture, Tourism and Entertainment for packaging the programme.

Chukwudike appealed to government to keep to their words by supporting young Entertainment personnel in the state to come to limelight.

Mr David Ibekwe, an event planner, said if government can live up to its words, Anambra youths with Entertainment talents would stay back home to contribute to the growth and development of the state in their capacity.

Mr Chukwuka Onuorah, a hypeman, said that he enjoyed the initiative of the Commissioner and called for its sustenance (NAN)