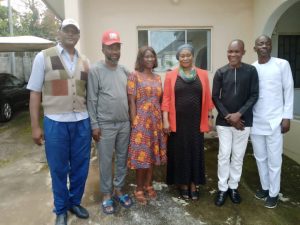 Charles Anike, National President, EU, said this on Wednesday in Abuja, when he led a team to pay a solidarity visit to Lancaster-Okoro.

Anike said that all over the world, women involvement and participation in leadership have been widely encouraged because they have proven to be more committed to developmental programmes.

“It will be a good omen if the good people of Abia will give opportunity to a very vibrant, visionary and determined woman, like Nnenna to help clean up the state.

“We therefore urge the good people of Abia to emulate, especially the Anambra State people that have over the years not only carried their women along but fronting their women in the political spaces.

“Both at the state and national level and no doubt this has accounted to the rapid development been witnessed and that is what the Anambra people are currently enjoying.

“So, we believe that a woman of the caliber of Nnanna will surely make the difference in governance if elected the next governor of Abia,” he said.

Anike said that the state was yet to enjoy dividends of democracy since the return to democracy  in 1999 due to godfatherism in the political space and hoarding of power and positions.

He said that should Lancaster-Okoro be given the opportunity to govern the state, things would change dramatically.

“When a woman with vast experience and international exposure is deployed to steer and revive the affairs of the state, the people will taste the dividends of democracy,” he said.

He urged the people of Abia to make bold move by supporting Lancaster-Okoro, irrespective of party affiliations, so as to usher in a new era of hope and quick recovery.

Responding, Lancaster-Okoro appreciated the group for supporting her.

She promised to live up to the expectations of the people when elected as the governor of the state.

Lancaster-Okoro also called for the support of women in order to bridge the gender gap in politics in the state. (NAN)