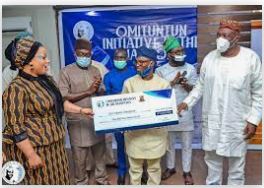 IN its quest to empower and engage youths in public discourse, a group, Omituntun Initiative in the Diaspora (OID), has launched its Seyi Makinde Annual Essay Competition 2022 in Oyo State.

Its Spokesperson, Mr Ayotomiwa Adebayo, said in a statement on Tuesday in Ibadan, that the essay was aligned with the interest of the governor in youths empowerment.

The News Agency of Nigeria (NAN) reports that OID is a professional group established to promote Gov. Seyi Makinde- led administration in the state.

Adebayo said that the group would serve as “a platform where youths are challenged to take interest in socio-political debates.”

According to him, it will also serve as an opportunity to advance their competencies in any human endeavour.

He said the competition was opened to residents and indigenes of the state from age 18 to 35, “who are students of any recognised institution in Nigeria”.

Adebayo said that the entrants would write essays on three topics bordering on the Makinde-led administration in the state.

He said: “The entrant is expected to write one essay entitled: Strengthening Transparency, Inclusiveness and Accountability for a Peaceful and Sustainable Development in Oyo State.

“Advancing the frontiers of possibilities for a safe, secured and prosperous Oyo State through citizen’s active participation in governance processes.

The group spokesman said that the top 20 participants would be sponsored for digital vocational skills training and awards would be presented to top participants at an OID reception.

Adebayo said the essay must be written in English using Microsoft Word format, adding that the entries must be between 800 and 1000 words (bibliography and references are excluded from the word count).

He said that the entries must be prepared in font size 12 Times New Roman with double spacing and pages numbered.

The spokesman said that plagiarism of any kind would result in automatic disqualification.

“Participants must be ready to provide proof of students’ identification and residency, if required. Names and contact details should be stated in the submitted entries.

“Entrants must be creative and draw practical examples from concluded or ongoing infrastructure projects in Oyo State.

“Points will be awarded to in-depth analysis and understanding of the topic, creativity, originality, depth of research and real-life application,” he said.

Adebayo said that no submission would be allowed after the deadline date as stated above.

He said that an electronic copy of the essay must be submitted through the link: admin@omituntunindiaspora.org.

The spokesman said that the stipulated deadline for submission Nov. 20 by 11.59 pm.(NAN)