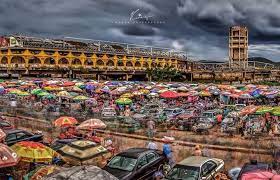 A coalition of Plateau indigenous groups and other related organisations have called for the suspension of proposed work at the Jos main market (Terminus) for what they describe as ambiguity in contract agreement.

According to them the agreement is between the state government and the financier of the reconstruction — Jaiz Bank Plc.

The group made the call in a meeting convened by the Chairman of the Christian Association of Nigeria (CAN) in Plateau, Rev. Fr. Polycarp Lubo on Monday at Government House, Jos.

The CAN chairman conveyed the stakeholders position at a news conference at the end of a meeting between the groups and state executives of the Plateau Government.

The News Agency of Nigeria (NAN) recalls that the Plateau Executive Council approved the reconstruction of the market gutted by fire in 2002  through a public private partnership with Jaiz Bank Plc.

The reconstruction is estimated to cost N9.4 billion for three phases of the market.

The CAN official said that he convened the meeting following tension in the state on information  that the state had mortgaged the lives and property of its youths for 40 years through its agreement.

He said the groups were aggrieved of not being consulted as critical stakeholders before the agreement on the market reconstruction.

He advised that the reconstruction should be put on hold until proper consultation would be done.

“We came to a conclusion that they (government) will go and redress this situation and look into our concerns until our fears are being addressed.

Speaking on behalf of government, Mr Chrysanthus Ahmadu, the Attorney General for the state, expressed concern that Plateau people had been misinformed on the reconstruction contract.

He explained that the “40 years period the a sub-lease for the buyers to help them to recoup from buying the shops.

“The agreement is that the allotees will be granted a 40 years sub-lease by the Jos Main Market Authority at the end of 40 years the property reverts back to the market authority.

He said the state government was still discussing with the bank as no conclusion had been reached but an understanding was reached on how the project would be executed.

“Jaiz Bank Plc. is just a financier, it is putting money for the contractor to do the job and at the end of it, they will sell 60 per cent while government will sell 40 per cent”, he said.

He assured the Plateau people of fairness and equity in the sale of the shops, saying even the 60 per cent to be sold by the bank would be supervised by government for fairness.

He added that government had listened to their concerns and would go back for further consultations to best serve the interest of the people.(NAN)