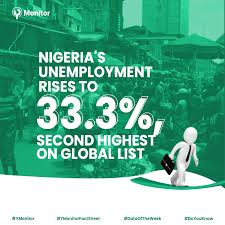 THE effects of high unemployment rate on the Nigerian economy are enormous and this state of affairs is no doubt fueling the worsening insecurity across the country. Perhaps, in line with declaring a national emergency on unemployment, the federal government must also develop policies, plans and strategies that will generate millions of jobs for the teeming unemployed youths.

AS Nigeria struggles to end the jihadist insurgency in its northeast and the daily attacks and killings by bandits across the country, many Nigerians believe that high unemployment rate in the country has been fueling the worsening insecurity.

Nigeria may just have found herself in a dilemma of unemployment and insecurity. Each, pushing the other towards an imminent chaos. While insecurity threatens the availability of jobs, diminishing even the few available sources of employment, unemployment on the other hand strengthens the core upon which insecurity thrives; a nightmare that seems to have no end in focus.

Reacting recently on the dilemma, Nobel Laureate Wole Soyinka said: “The already over-stretched sinews of moral restraint has been snapped off the casing of nation being, and nothing is left but the collective wails of impotence. Not for the first time, what many hoped was a Natural Law of Limitations has been contemptuously, defiantly breached.”

“This means that 33.3 percent of the labor force in Nigeria or 23,187,389 persons either did nothing or worked for less than 20 hours a week, making them unemployed by our definition in Nigeria,” the report said.

Speaking at a recent Channels Television programme; ‘Hard Copy’, Gov. Koyede Fayemi, of Ekiti state and chairman of the Nigeria Governors Forum, referred to Nigeria’s unemployment situation as “The cocktail of the fallout of Covid-19, insecurity and the general depression of the economy.”

Although Fayemi agreed that the situation is a universal one, as “Even more matured democracies that have better plans and are more organized are experiencing the same bout of inflation, unemployment, reduced GDP, and generally low Human Development Index, HDI, at least they have better institutions to cope.”

Our challenge is that “Nigeria has an economy that is on recession at the time when there is a global pandemic, we are still building our institution, still trying to strengthen our resilience to cope with the vagaries of uncertainties.

“That put us in a much worse situation than other countries that are experiencing the same problem.” he said.

But Nigeria’s unemployment rate cannot be completely blamed on the country’s current recession, or on the pandemic, which came in the last quarter of 2019. Unemployment has been with us for a very long time and although every government had tried to solve the problem, they have always focused on temporary solutions. The stomach infrastructures have done nothing, but put off the judgment day to a future date.

Fayemi calls the efforts of the government towards curbing the problems of poverty and hunger, ‘a wrong approach which is not sustainable’. To say that the current challenges of unemployment is a novel one is not true. In 2015, Femi Gbajabiamila, the then majority leader of the House of Representatives, had called on President Muhammadu Buhari, to declare a state of emergency on unemployment in Nigeria.

In the motion titled “Call for a state of Emergency and Legislative Intervention in the Unemployment Crisis in Nigeria”, he had argued that with a 24% unemployment rate, “the crisis had reached an alarming rate enough to be of serious concern to everyone. He called for urgent job creation measures throughout the country. At the end of that session, as stated by OrderPaper, the house only “Mandated the various committees on Labour, Employment and Productivity, Federal Character, and poverty alleviation to jointly liaise with the Federal Ministry of Labour and Employment to conduct a comprehensive audit of the pay and staff role of all public institutions with the aim of eliminating ghost workers.”

Earlier in 2018, the National Bureau of Statistics, NBS, stated that unemployment and underemployment rose to 23.1 percent and 16.6 percent respectively.

Commenting on this, the Minister of Labour and Employment, Senator Chris Ngige, described the situation as ‘alarming. At a lecture he delivered while declaring open a two-day workshop with the theme “Breaking the Resilience of High Unemployment Rate in the Country” on May 2, 2019, in Abuja, he said “It was a worrisome status to be referred to as the global poverty capital, as declared by the World Bank in 2018.

Although Ngige insisted that the government has not been resting on her oars over the years in terms of dedicated efforts to curb the unemployment problems, he said that the various social intervention programmes from 1972 to date, about 14 different programmes have been implemented.

These programmes targeted at reducing youth unemployment and eradicating poverty, included the National Accelerated Food Production Programme, NAFPP, implemented between 1972 and 1973, the current National Social Investment Programme, NSIP, which has been ongoing since 2017, embedded in the National Economic Recovery and Growth Plan, ERGP, 2017-2020, has not yielded any meaningful results as the unemployment rate continues to be on the rise.

In April 2020, another motion to declare a state of emergency on unemployment was raised by Messrs Muda Umar, Kabir Tukura, and Karu Elisha, titled, “Need to declare a state of emergency on the challenges of youth development in Nigeria.” In the motion, the lawmakers noted that the population of Nigeria, as reported by the United Nations Population Fund, had risen to about 201 million in 2019, with 60 percent of the population being made up of youths between the ages 15 and 35. The motion said that if the current socioeconomic challenges of unemployment, poverty, drug abuse, and insecurity, access to quality educational and economic opportunities, corruption, and greed in Nigeria are not addressed, they could undermine the stability and sustainable economic development of the country. Accordingly, the resultant effects on the youths would be an increasing crime rate such as kidnapping, insurgency, banditry, armed robbery, cyber-crimes, prostitution and other vices. This is already happening.

An editorial published by the Guardian newspaper wondered why the lawmakers were only just waking from their slumber to the obvious realities, which it called ‘the monster of youth unemployment’. Several factors could be attributed to being the cause of this devastating unemployment state in which we currently find ourselves.

However, some stakehoders blame the high unemployment in the country on rising inflation, insecurity, high population growth, lack of political will and corruption among others

According to Pat Utomi, a professor of political economy, the high rate of unemployment should be placed at the doorstep of the politicians who lack the will to liberate the economy.

“Two years ago, you could tell Nigeria will be where it is by the numbers. It is not rocket science. We could see it build up,” Utomi said.

Financial expert at Financial Derivatives Company, owned by Bismarck Rewane, said that it was not surprising that Nigeria was now the second nation with the highest unemployment rate in Africa.

“Not surprisingly, the number spiked by 6.2 percent to 33.3 percent from 27.1 percent in Q2’20. The figure now makes Nigeria jump from No. 5 to the 3rd highest rate of unemployment in the world,” he said.

He, however, noted that the data point would be very disturbing to policymakers after the stimulus package of N2.3tn or four percent of GDP and the recent greatly heralded exit from recession.

Akinwumi Adesina, the President of the African Development Bank and a former minister of agriculture in Nigeria, stated that Nigeria’s unemployment rate “is spiraling, driven by the wave of four million young people entering the workforce every year with only a small fraction able to find formal employment”.

For Prof. Wole Soyinka, “We need to remind ourselves of hideous precedents. We must remember Chibok. And Dapchi. And numerous antecedents and after, unpublicized, or soon relegated to the sump of collective amnesia.

“The wages of impunity never diminish; on the contrary, they distend.

“I envy no one the task ahead, terminating the toxic harvest of past derelictions. Blame laying is for later. Right now is the question of – what needs to be done, and done urgently,” he added.