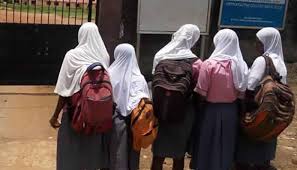 THE 10 schools affected by the Hijab controversy in Ilorin are to remain shut pending the outcome of the State Government consultations with stakeholders on the use of the Muslim headgear in schools.

According to a statement made available to the News Agency of Nigeria (NAN) in Ilorin on Monday, this is to avert any breakdown of law and order, while the government concludes the consultations with relevant stakeholders.

In the statement, the Secretary to the State Government, Prof. Mamman Jibril, urged members of the public to remain calm and peaceful.

“Official pronouncement of government’s position is likely this week.

“The government urges parents, officials and authorities at the affected schools to maintain peace and avoid making comments or doing anything that could cause further misunderstanding and heat up the polity,” the government advised. (NAN)