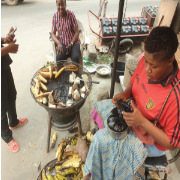 Mama Kelechi at her shop doing what she does best

A mother of 6 children has been in the business of roasting plantain, yams, and corn for over 7 years.  Although heat is a major challenge in the business, but Mama Kelechi says: “When I got used to it, I can even turn the hot charcoals with my bare hands.”

EVERY day except on Sundays, Mama Kelechi, sits behind her locally fabricated oven roasting plantain for her customers and passers-by along Independent Street in a quiet and developing area of Anifowoshe in a suburb of Ikeja. This industrious mother of six derived her name, Mama Kelechi, from the name of her first child. Although Anifowoshe is dotted with a few offices and a mosque, Mama Kelechi’s business appears to be well suited in this area and away from the hawks, known as local government workers, who daily harass small business owners like her in different parts of Lagos state with all kinds of levies.

In her chat with Realnews, which is located a few metres from her popular SPOT, Mama Kelechi recalled that her business started over nine years ago in the area and that the money earned from the business has helped in the training of her six children. Although Mama Kelechi is happy with her daily earnings from the business, but she quickly added that it was not smooth sailing all through these years.

“My husband was against this business when I started, but with time he had to adjust because that’s what I like doing and I make reasonable earnings from it.

“At first I was staying just opposite where I’m now and then I was paying some fees, it was a long time ago and the place had shops. When I moved to this open place, no one asked me to pay any money and it has been like this since then, more than seven years now.

“My children do help me out when they come back from school instead of playing around in the streets,” she said.

“Many people have asked me why I should not concentrate on just one item like roasted yam, and I have told them that when the new yam starts, many people would not like to eat them. That is why I move straight to corn, which is cheap at the time because it is in season and I make money from that.

On how she fixes the prices of her products, Mama Kelechi explained that the prices are largely determined by the sizes and how much she buys them from the market and also the cost of charcoal she uses in roasting them as well as her labour too.

“I can’t just say I sell my goods for a certain price until I go to the market. Some of them go for as high as N200 each and others as low as N100 for both roasted yam and plantain.

“For roasted corn, it’s almost the same because I can sell a big corn for N150 and small ones as low as N50 depending on their size,” she said.

She advised women, especially housewives, who are not engaged in any craft or business to start small businesses like selling roasted corn.  “Some women will think it is so difficult, but it is not. However, it would appear so initially, and with time, they will get used to the smoke and heat that are the challenges in the business.”

But when I got used to it, I could even turn the hot charcoals with my bare hands,” she said laughing.

Another secret behind the success of Mama Kelechi is that Lagosians patronize roasted plantain, yams and corn. Many have accepted Mama Kelechi’s foods as their favourite roadside snacks. In Lagos State and other South-western states of Ogun, Oyo, Ondo, Osun and Ekiti, office workers and other low-income workers patronize the operators of these roadside snacks throughout the year. It is also popular among travellers on busy Nigerian roads.

Some of the workers, who patronize these operators of roadside snacks said that the snacks are not only rich in vitamins, there are also cheap, especially roasted plantain which is known locally in the Southwest as boli. Some prefer eating boli that is served with spicy stew of ponmo ‘cow skin’, while some others like to eat it with beans or groundnut.

For instance, Chioma Okeke, an office attendant told Realnews that she eats boli every day of the week. “I love boli and beans so much that I introduced it to my bosses in the office. “They usually send me to get it for them from Mama Kelechi every afternoon and while going, they give me money to get for myself too. I change during the rainy season to something other snacks since she sells corn and I am not a fan of corn,” she said.

Emmanuel Olajide, a businessman, says that he goes to the woman’s shop himself to get his boli daily. “My shop is close to the boli woman’s shop and I prefer my boli with ponmo and not beans. Sometimes I go for yam and so I won’t be taking only boli whenever I am hungry. My children do ask for it too whenever they return from school and they eat it as their lunch with their mother and it tastes very good,” Olajide said.

However, in most Nigerian cities where a lunch pack costs between N1500 and N3000 in an average restaurant, a meal of roasted plantain or yam that costs less than N400 must be preferable and attractive to many workers and lovers of these snacks. So Mama Kelechi and the other roadside snack dealers will always remain in business all year round.