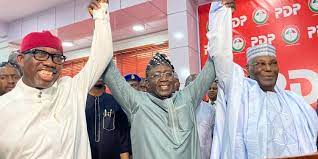 LAST minutes push by top shots of the People’s Democratic Party (PDP) yesterday paved way for the emergence of the Delta State Governor, Ifeanyi Okowa, as the running mate of the presidential candidate of the party, Atiku Abubakar.

Okowa’s fate, Daily Trust gathered was sealed at a marathon meeting held in Abuja at the early hours of Thursday. The development ended the quest of the Rivers State governor, Nyesom Wike, to become the running mate of the party’s flag bearer.

Wike was selected on Tuesday by an advisory council constituted by the National Working Committee (NWC) of the party to review the report of the former National Security Adviser, General Aliyu Gusau on the selection of the running mate.

Credible sources told this paper that at the meeting attended by top shots of the party including the National Chairman, Iyorchia Ayu, Atiku, former Senate President, David Mark; former governor of Jigawa, Sule Lamido; Wike, Okowa, among others, the candidature of Okowa was supported by the stakeholders.

Daily Trust had exclusively reported on Tuesday that Atiku had narrowed down on Okowa but requested the party leadership to recommend suitable candidates for him.

Speaking to Daily Trust, one of the leaders of party, who attended the meeting, said at the end of the meeting that lasted till 3: am on Thursday, they agreed to pick Okowa as the running mate, saying Wike “will be a hard to sell especially in the northern part following his stand on some national issues.”

Asked what the reaction of Wike was, the source said, “he left immediately after the meeting but what I can tell you is that he is not going anywhere. He will work with us as you know everything is going in our favour.”

A  Board of Trustee (BoT) member of the party said Wike had been persuaded not to defect and that they would continue to talk to him in the interest of the party.

Beyond the meeting, Daily Trust gathered that the founding fathers of the party had reservations on the candidature of the Rivers State governor.

“Because of his personality trait, the party’s founding fathers had reservations. They said the party needed a calm and level headed person that would be loyal and take instructions from the president if they eventually win the election in 2023,” Daily Trust was told.

Another issue that worked in Okowa’s favour was his contribution to the victory of the Atiku during the presidential primary, he said

“He mobilised resources and delegates for Atiku. He has been consistently supporting Atiku’s presidential ambition. In 2019, he mobilised and worked for Atiku when Wike supported Tambuwal,” an ally of the former vice president said.

Atiku said the choice of Okowa as his running mate was a difficult decision for him.

Addressing members of the party’s BoT, stakeholders and supporters at the party headquarters just before announcing his choice, Atiku said announcing his running mate was a “difficult decision that I am called upon to take. But, as someone hoping to lead a complex country such as ours, tough and difficult decisions would remain a part of my everyday life.”

The candidate also said, “In arriving at the decision, I held wide consultations with various stakeholders in our party including our governors, national working committee, board of trustees, and other leaders to seek their inputs and their wisdom.

“In these consultations, I made clear that my running mate would have the potential to succeed me at a moment’s notice, that is, a president-in-waiting.

“In other words, the person must have the qualities to be president. The person must have an appreciation of the deep rot which our country has been put into by the rudderless APC government; understands the great suffering that most of our people are going through and the urgency of relieving them of that suffering; understands the critical importance of economic growth and development to provide our young people with jobs, hope, and a pathway to wealth.

“In addition, my running mate has to be someone who is not afraid to speak his mind and give honest advice, and, be by my side as I work very hard to reverse the destructive impact of the past seven years of the APC government.”

Atiku further said he is aware that Okowa will not only add excitement to the ticket and campaign, “but will also help to bring focus, discipline and stability to our government, come 2023.”

Wike, Ugwuanyi, others absent at unveiling

Governor Wike, his main backer, Enugu State governor, Ifeanyi Ugwuanyi and other stalwarts in their camp were conspicuously absent during the unveiling of Okowa yesterday.

Daily Trust reports that Governor Ugwuanyi, who was at the secretariat left before the commencement of the programme.

But addressing journalists after his screening exercise, Okowa said he believed Wike would not be disappointed with his emergence because of his love for the party and the country.

“Governor Wike is a very strong party man; he has great love for our party and I believe he is also a good democrat, he understands that when several brothers are in the race for a particular position, it has to be one person at a point in time.

“But I want to assure you that Governor Wike is a very good man  and his interest for this country and the party  is to be able to rise up to the challenge at the moment is strong and I do not feel that he is going to be disappointed,” he said.

Okowa also noted that Nigerians would soon be hearing a lot from the campaign organisation, adding that “we are in the process of ensuring that Nigeria is returned back to its glorious days.”

Chairman of the screening committee of the PDP vice-presidential candidates, Chief Tom Ikimi also told journalists that Okowa had been screened and found to be qualified to be the running mate of Atiku.

Chairman of the PDP BoT of the party, Senator Walid Jibrin, hailed the emergence of Okowa, saying the party was set to sack the ruling All Progressives Congress.

In a statement, Jibrin, urged other contenders to support the party’s candidates.

“This decision must be generally accepted as the act God who gives life to who He wants and take away life from who wants. HE has bounties unlimited. PDP is greater than any party in Nigeria especially the APC. Therefore, I urge all PDP members to accept this decision in good faith and give the strongest support to Atiku Abubakar as president of Nigeria and his Vice president chief Okowa as his  vice president,” he said.

Okowa, born on July 8, 1959, hails from Owa-Alero in Delta State. He graduated from the University of Ibadan in 1981 and became Secretary to the Ika Local Government and then Chairman of the Ika North-East Local Government Council between 1991 and 1993.

He was elected senator for Delta North Senatorial District in April 2011, from where he was sworn in as governor on May 29, 2015 after winning the election.

An atmosphere of uncertainty has permeated the ruling APC following the submission of Alhaji Kabir Ibrahim Masari as the “dummy” running mate of the party’s flag bearer, Asiwaju Bola Tinubu.

Masari, a former National Welfare Secretary of the APC during the era of the Comrade Adams Oshiomhole- led NWC, was nominated pending the conclusion of the consultation on the issue of running of mate by various groups.

Sources in the Tinubu’s camp and around Masari told this paper that he was nominated as “a dummy running mate.”

One of them said, “He was picked as a dummy pending the resolution of some issues on the running mate.”

It was further gathered that Masari would withdraw from the race in line with section 31 of the electoral act.

“An agreement has been reached to this effect, “another source said.

It was learnt that Masari has been with Tinubu for a very long time “and will not misbehave when the time for him step aside comes.”

He was a member of the PDP in the era of late President Umaru Musa Yar’adua.

After the death of Yar’adua in 2010, Masari defected to the Congress for Progressives Change (CPC), the party under which President Muhammadu Buhari contested but lost the 2011 election.

Masari had worked for Buhari, but ex-President Goodluck Jonathan, who stepped into office after Yar’adua’s death, won the election.

Ahead of the 2015 election, CPC collapsed its structure into APC and Masari joined the ruling party.

He is from Masari, a village in Kafur Local Government Area of Katsina State.

The deadline issued for the submission of candidates for the presidential positions by the Independent National Electoral Commission (INEC) lapses today.

It was also gathered that yesterday’s meeting of the  ruling party’s NWC chaired by the National Chairman, Senator Abdullahi Adamu at the party’s secretariat, ended without any news on the running mate.

Report had filtered round at the secretariat during the NWC meeting that Tinubu was coming to unveil his running mate. He was not around until the meeting ended. The NWC refused to brief the press at the end of their meeting.