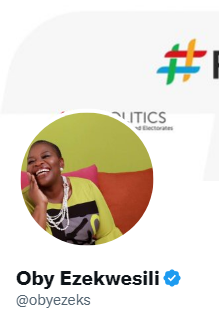 OBY Ezekwesili a former Minister of Solid Minerals and Minister of Education, has in a tweet on Wednesday urged Nigerian’s to Vote Labour Party presidential candidate for a better Nigeria.

The former Minister who has been very outspoken about the 2023 general elections gave an Analytical way for Nigerians to decide the best presidential party candidate to vote for.

In her tweet, she said, A very analytical way to decide which party candidate to vote for as president:

“If you like the current state of the country and wish it to remain or worse more, vote APC.

“If you like the identical twins of APC, vote PDP.

“If you believe Nigeria can be better, Vote Labor”