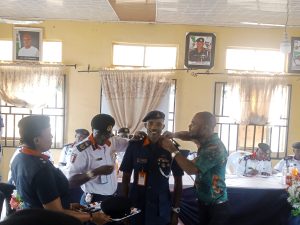 The Spokesperson for Imo Command of the NSCDC, Mr Lowell Chimeziri, being decorated with the rank of Chief Superintendent of Corps on Tuesday in Owerri. Pic by NAN Owerri.

The State Commandant of the corps, Mr Matthew Ovie, performed the ceremony at the command’s headquarters in Owerri.

Ovie said that the promotion, which had lingered for some time, was made possible by the corps’ Commandant-General Ahmed Audi.

He thanked Audi for his outstanding performance anchored on his five-point agenda of revamping, resuscitating, rejigging, reinvigorating and restructuring the corps.

He felicitated the promoted officers and urged them to double their efforts toward a more efficient service delivery.

He promised other officers of the command that were eligible for promotion that theirs was on the way.

According to him, the commandant-general is committed to officers’ welfare through promotion for better livelihood.

“As you celebrate, strive to be magnanimous in celebration and bear in mind that this is a call to more service.

“Justify the confidence reposed in you for the good of Nigerians resident in Imo,” Ovie said.

Ndanusi admonished officers waiting to be promoted to show more dedication to duty .

He advised the promoted officers to endeavour to bring their experience to bear in the discharge of their duties.

“I congratulate you and seize the opportunity to remind you that a recognition for hardwork is a call to more work.

“For those who have yet to be promoted, I urge you to embrace punctuality and dedication to duty and see how God will perfect your promotion at His appointed time,” Ndanusi said.

Reponding on behalf of the promoted officers, the command’s Head, Public Relations Unit, Mr Lowell Chimeziri, thanked the management of the agency for the honour bestowed on them.

He reaffirmed their commitment to duty as a way to give back to the corps and Nigerians.

Others, including 15 persons, moved from CSC to Assistant Commandant, while 18 persons moved from SC to CSC. (NAN)