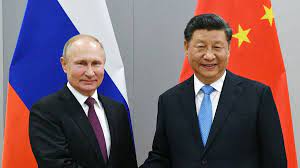 RUSSIA’S Vladimir Putin and China’s Xi Jinping are expected to attend the G20 summit in Bali in November, according to Indonesia’s President, Joko Widodo.

“Xi Jinping will come. President Putin has also told me he will come,’’ Widodo told Bloomberg in an interview published on Friday.

Indonesia currently held the G20 presidency. Widodo had invited Putin but the Kremlin had so far not confirmed the Russian leader’s plans either way.

Presidential advisor, Siti Ruhaini confirmed that Widodo had been told Putin and Xi would come.

“That’s what the president said,’’ she noted.

“As the holder of the G20 presidency, Indonesia naturally wants the summit to be a forum where everyone gets together in a friendly atmosphere,’’ Ruhaini added.

Widodo had tried to mediate between Russia and Ukraine, visiting the two countries in late June on a trip that he described as a peace mission.

He has warned that a global food crisis caused by the Russian invasion of Ukraine would send people in developing and poor countries into “the abyss of extreme poverty and hunger.’’

There was no immediate confirmation of Putin and Xi’s attendance plans from Russian or Chinese sources.

Putin’s participation in the summit is considered problematic in the West amid Russia’s invasion of Ukraine and several countries had put in doubt, whether they would participate if Putin attended in person.

China is also experiencing heightened tensions with the U.S. that were exacerbated by U.S. House Speaker Nancy Pelosi’s recent visit to Taiwan, which was followed by a U.S. congressional delegation visiting Taipei.

Indonesia is seeking trade and investment and is not seeking to join any bloc, Widodo told Bloomberg.

“Indonesia wants to be friends with everyone,’’ “We don’t have problems with any country.’’ he said. (dpa/NAN)