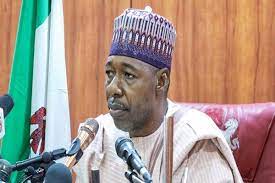 Zulum stated this in Gombe on Friday at the opening of the 7th meeting of the forum.

He said reduction in the activities of the insurgents arose from deliberate steps that had been taken to that effect.

He said steps taken were largely informed by credible intelligence government received that some Boko Haram members were contemplating repentance and surrendering following the death of their leader, Abubakar Shekau.

He added that government took advantage of the intelligence report to immediately set in motion a non-kinetic policy of ending the insurgency by encouraging and incentivising those willing to surrender.

“Our non-kinetic approach was so successful that from the initial few insurgents who surrendered, the number of those willing to surrender began to increase exponentially.

“So, as it is being widely reported, Boko Haram insurgents have been surprisingly coming out of their enclaves and war trenches in droves and willingly surrendering themselves to the authorities.

“The situation is as overwhelming as it is extremely gratifying in its impact; this is the first time, since the deadly insurgency began that the insurgents are freely and spontaneously laying down their arms and giving up the fight,’’ he said.

“From all indications, it appears to be the beginning of the end of the insurgency,’’ then chairman stressed.

He commended President Muhammadu Buhari for his “wilful resolve and unquestionable determination to end the insurgency’’.

Zulum also commended the military and other security agencies for their “undeniable sacrifice and relentless efforts to deal with all forms of insecurity in the Northeast’’.

The chairman said the meeting would also deliberate on youth restiveness, unemployment and extreme poverty in the region in addition to insecurity.

He said states in the geopolitical zone would work collectively to harness their vast resources for socio-economic viability and sustainable growth and development.

“As we are now set to deliberate on matters of common interests and shared responsibilities, there is a compelling need for us to take a more critical look at the emergent issue of kidnapping.

“Kidnapping has become a crime of choice for criminals and is becoming rampant and widespread,” Zulum said.

In his address of welcome earlier, Gov. Inuwa Yahaya of Gombe State said the presence of the governors symbolised the growing strength of cooperation and cordial relationship between them.

Yahaya said the meeting was coming at a time when the region and indeed the entire country continued to grapple with multiple challenges that required urgent solutions.

He said the formation of the NEGF had been a tremendous success, forging a common front for people of the six states in the zone irrespective of ethnic, religious or political considerations.

“Over the past two years, we have developed the understanding, conviction, steadfastness, and cooperation needed to address the common problems undermining the growth and development of our zone.

“We have been able to collectively engage, mobilise and sensitise stakeholders at the highest level both nationally and internationally,’’ Gov. Yahaya said. (NAN)