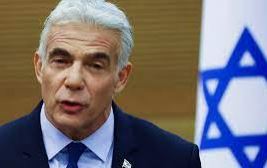 “I have a child with special needs. Her name is Yaeli. She is autistic. She doesn’t speak,” Lapid said.

Lapid then related events from the 11-day conflict between Israeli forces and militant Palestinians in the Gaza Strip in May 2021, during which missiles were fired from the region controlled by Hamas.

Israel’s air force bombed numerous targets in the Gaza Strip before Egypt mediated a cease fire between Hamas and Israel.

Lapid talks of a missile attack on Tel Aviv during the conflict when he had to take his daughter to safety.

“I wake her at 3a.m. in the morning and run down with her to the bomb shelter, because missiles were exploding above our home,” he said.

“All those who preach about the importance of peace, are welcome to try running to a bomb shelter at 3a.m. with a girl who does not speak.

“And you have to explain to her, without words, why there are those who want to kill her,” he said.

Lapid said that Israel had been asked repeatedly why it did not lift restrictions on Gaza.

Israel was ready to help build a better life for the people of Gaza, he said.

“We only have one condition: Stop firing rockets and missiles at our children.”(dpa/NAN)