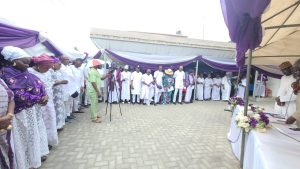 FAMILY, friends and members of the Lagos4Lagos Movement gathered on Wednesday for the one year memorial service in honour of the late Princess Adenrele Adeniran-Ogunsanya.

Adeniran-Ogunsanya, a former Apex Leader of the Lagos4Lagos Movement and one-time Secretary to the Lagos State Government died on Jan. 25, 2022 at the age of 74.

Adediran said at the event: “We desire to glorify God for her (Adeniran-Ogunsanya) exemplary life, her inspirational leadership, and her genuine love for the well-being of the masses while she was here with us”.

In her remarks, Akindele, who described the memorial service as a bit emotional, said that she learnt a lot of lessons from the late SSG even though she never met her.

According to her, one of the lessons is patience and relying on God factor for elevation in life.

“Today, I want to celebrate her and get to know more about her patience.

“We are still grieving her loss and missing her dearly; we besiege Almighty God to continually grant her eternal rest,” Akindele said.

Also speaking, Yeye Adenike Sobajo, a friend and political associate of the late SSG, eulogised her.

“Aderenle and I were very close, she was a little bit older than I,” she said.

Describing the PDP governorship candidate as a good man, Sobajo, said, ” I have seen some goodness in you. I have seen that you mean well for us in PDP”.

Sobajo commended Adediran for taking Akindele as his running mate, saying she would not disappoint the people.

Other family members and friends took turns to eulogise the late Adeniran-Ogunsanya at the service. (NAN)