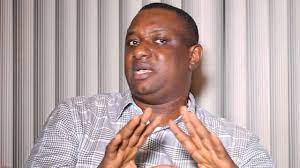 The Senior Advocate of Nigeria, who appeared Monday on Arise TV morning show, was responding to questions concerning the health status of Tinubu.

There have been controversies surrounding the health status of the APC flagbearer, with his critics saying he is unfit to be president.

But Keyamo said Tinubu had never collapsed or fallen anywhere before, therefore, there was no basis asking for his health status.

“No matter how much they repeat it; the opposition and some sections of the press, no matter how much they parrot it, the fact remains that there is no evidence to the contrary, that my candidate has some kind of health issues.“I said on this programme before that the strategy has been to repeat a lie a thousand times until that lie sticks out as the truth. But as I speak with you in the last few weeks, Asiwaju Bola Ahmed Tinubu has been more active on the campaign trail than any other candidate.

“He has been going around day to day, hour to hour from place to place, having several meetings and after all of the rallies, continuous consultations till the wee hours of the morning. So, how else can one prove his fitness other than that? It is just a strategy of the opposition to continue to stick to this and repeat it a thousand times.

“But, let me tell you, ordinary Nigerians watching their television screens reading about him have made up their minds. I can tell you that no matter how much you continue to repeat it, there is no problem at all with Asiwaju Bola Ahmed Tinubu.