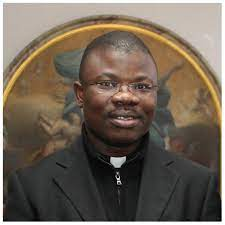 THE Parish Priest of St. George’s Catholic Church, Omu-Ekiti, Rev. Fr. Micheal Olofinlade, who was abducted on Saturday, has regained his freedom

The News Agency of Nigeria (NAN) reports that the Paramount ruler, Owajumu, of Omu-Ekiti, Oba Adeyeye Ogundeyi, disclosed this to journalists on Tuesday in Omu-Ekiti.

Oba Ogundeyi said Fr. Olofinlade was sighted along Itapaji-Ekiti Road after he was released by his abductors.

He noted that the priest was currently receiving treatment in an undisclosed hospital in Ekiti.

NAN recalled that Olofinlade was kidnapped on Jan. 14 while returning to his base in Omu-Ekiti after a pastoral assignment in Ado-Ekiti.

The Bishop of the Catholic Diocese of Ekiti, Felix Ajakaye, had earlier solicited for prayers from members of the church for the quick and safe release of Olofinlade.

However, the Police did not make any statement regarding his release or whether a ransom was paid before he was released. (NAN)