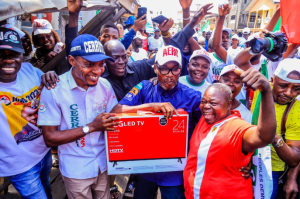 MR Segun Adewale, the Peoples Democratic Party (PDP) Lagos West Senatorial candidate, has declared that the jostle for the seat is never a task to be committed to political novices.

Adewale made the statement at the inauguration of his campaign and mini rally held in the heart of the Senatorial District in Ikeja, Lagos.

Addressing the supporters at the Computer Village, the candidate  urged residents to vote for him and candidates of the PDP in the House of Representatives, and Assembly elections.

Adewale urged the people to collect their Permanent Voter Cards (PVCs) before the January distribution deadline lapsed and to vote for competent leaders.

“Without your PVC, you cannot vote, and you must vote because I am sure you want a change in government.

“You want a government that will work for you, your children, and your family. Therefore, l beg you to please collect your PVC and vote for us,” he said.

The PDP senatorial candidate, while addressing residents of Lagos West in Ikeja, Agege, and Ifako-Ijaye local government areas, maintained that “government is a serious business, and not for the inexperienced, but for persons with proven track records in public and private endeavours”.

According to him, “as an accomplished businessman, philanthropist, and astute politician, l have proven track records both in the public and private sectors”.

He restated his commitment to fulfill his pledges to residents of Lagos West, if elected on Feb. 25.

Responding to his call, many of the Lagos West residents chorused that they were ready to cast their votes for him at the election.

They acknowledged Adewale as the “right man” to represent the district, and that his credibility could not be questioned.

The News Agency of Nigeria (NAN) reports that the rally, which started along the sidewalks of Obafemi Awolowo way, Ikeja, later dovetailed into a funfair campaign as supporters trooped out enmasse to identify with their own.

The candidate moved through the crowd at each local government, distributing a variety of gifts, including plasma televisions, generators, food, cash empowerment, and mobile phones to individuals. (NAN)