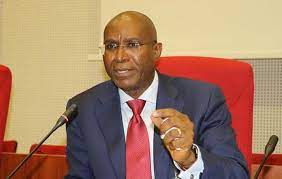 Omo-Agege made the observation on Saturday at the 5th Annual Leadership Lecture/Graduation Ceremony of the Value Rebirth-Centre-LSD Leadership School, Effurun/Warri in Delta.

The senator, who was represented by Mr Mathew Omonade, said he believed in unity and urged people to enthrone sound ethical leadership rooted in respect, honesty, service, equity, justice and community service.

Omo-Agege, the All Progressives Congress (APC) Governorship flagbearer in Delta, noted that over the years, poor leadership had frustrated the achievement of the  country’s enormous economic and political potentials.

“But all is not lost because State and nation-building all over the world have been and remain a permanent work in progress.

“As we move towards leadership selection in 2023, the leaders we need now should posses knowledge, sound Judgment and commitment to specific causes and ideals,” he said.

The senator representing Delta Central Senatorial District, said that the country needed leaders with good moral conduct and ethical responsibility to attend to demands, needs and problems of Nigerians.

Omo-Agege, however, noted that genuine leadership also needed honest, courageous and credible followership less vulnerable to manipulation, adding that followership was an indispensible aspect of leadership.

He said the stability and progress of the country required the deployment of deliberate commitment by citizens and those entrusted with leadership to advance the national agenda, regardless of challenges.

Also, Mr Monday Osasah, Executive Director, African Centre for Leadership, Strategy and Development (CENTRE LSD), said the leadership school was a flagship programme of the Leadership Institute, adding that it started in 2009.

He said the idea was borne out of the realisation that leadership was a major challenge, especially in Africa.

Osasah said the Centre LSD Leadership School was designed for people who wanted to become leaders and be equipped with leadership skills for the transformation of organisation and society.

“Aside the Leadership School in Abuja, the Centre is running similar school in Warri, Benin-City, Port Harcourt, Abakaliki and Jos in Plateau State.

“This Effurun/Warri Delta annex of the school is run in collaboration with Value Rebirth and Empowerment Initiative (VREI),” he said.

He said it had now graduated 359 students since inception in 2017, adding that 200 students had been admitted

Speaking on the theme of the lecture, the guest lecturer, Mr Johnson Ikube said that Nigerians must acknowledge that there were challenges confronting the nation.

Ikube urged people to vote for competency and not popularity in the 2023 general elections.

He advocated for the decentralisation of government, noting that the system would function better under a decentrised arrangement.

“We have gotten to a level where human life has become meaningless, not only in Nigeria but in the entire world,” he said.

Ikube expressed worries over the wrong use of social media, saying that it had heightened insecurity in the society.

He said that Nigerians must unite and restore the glory of the country, stressing that, “this is our country, we must keep hope alive and join hands together to bring it back to the good old days. (NAN)