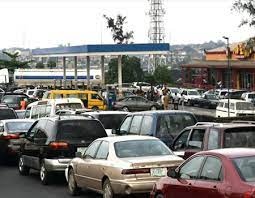 LONG queues for Premium Motor Spirit (PMS) persisted on Sunday as motorists decried difficulty associated with the process of obtaining the petroleum product even at a higher cost.

Some of the motorists told our correspondent that they had waited for more than three hours and were yet to access the pump to purchase fuel for their vehicles.

Awusa Bobby said he joined the long queue at Rain Oil for over three hours and was yet to come close to purchasing the fuel for his car.

In the same vein, Olije Jerome, who queued up at the NNPC Filling Station, said though the station dispensed the product at the normal government rate, it was difficult getting to his turn for the fuel purchase.

Meanwhile, most of the fuel stations across Makurdi, the state capital, are not selling as some claim they do have the petroleum products.

But those selling with fewer queues on their premises are charging customers as much as N300 per litre while others with longer queues apart from the NNPC, A. A. Rano and Shafa filling stations dispensing at N190; sold at between N260 and N280.