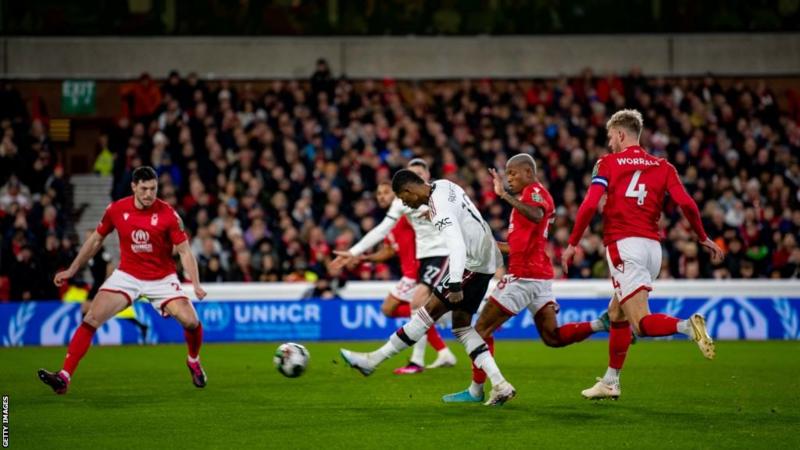 MARCUS Rashford’s sensational scoring streak continued at the City Ground as Manchester United closed in on an EFL Cup final appearance at Wembley next month with a three-goal victory over Nottingham Forest.

Wout Weghorst added a second just before the break with his first goal for the club and Bruno Fernandes wrapped up the scoring a minute from time to provide Erik ten Hag’s men with a healthy advantage for the return at Old Trafford in seven days’ time as United look to end a trophy drought stretching back to 2017.

Rashford’s goal took his tally to 10 in as many games since he returned from the World Cup, underlining his status as one of England’s form players at present.

It was his fifth goal in this competition alone, putting him at the head of the leading scorer’s list.

Weghorst has every reason to be pleased with himself too as he reacted quickest after Wayne Hennessey had saved Antony’s low shot and turned home the rebound, while substitutes Facundo Pellistri and Anthony Elanga were both involved as Fernandes drove a low shot past Wayne Hennessey.

Ten Hag punching the air in celebration underlined the significance of that third goal.

Steve Cooper’s hosts were adventurous in their approach but they would appear to have little chance of emulating Brian Clough’s side by reaching the final, which Forest have not done since 1992.

Ten in 10 for Rashford

There was certainly something familiar about the way Rashford collected Casemiro’s pass inside his own half, then ran at the Forest defence from his left-wing station.

Rashford opted not to take his shirt off and twirl it above his head in celebration as Ryan Giggs famously did after his 1999 FA Cup semi-final replay winner against Arsenal at Villa Park, but it was still a fabulous effort.

One moment in particular caught the eye. Racing into the box at top speed, with defenders in close attendance and the ball on his favoured right foot, Rashford ran over it, altering his balance to make it a left-footed strike, which he promptly drilled passed Hennessy at his near post.

It was indicative of his form at the moment. Only Erling Haaland has scored more than his 18 in all competitions so far this season, which puts him in a pretty strong negotiating position over a new contract, given his present deal expires in 18 months’ time.

Little wonder Ten Hag took him off with half an hour left. Having stated his ambition to create the best side in the world, the Dutchman’s chances of making progress with his current squad would be badly impeded if Rashford was not in it.

Forest fail to make an impact

Forest boss Cooper deserves credit for setting his team out to attack their visitors.

In a repeat of the 1992 final, the hosts recovered from a slow start and deserved to be level at the break.

They probably would have been had Surridge timed his run better or Morgan Gibbs-White played his pass a bit earlier. As it was, Surridge was marginally offside before beating David de Gea and VAR ruled it out.

De Gea saved well from Gustavo Scarpa before Brennan Johnson wasted the trickery that took him past Cristian Eriksen and Lisandro Martinez on his way into the United box by slashing his shot high and wide of the goal.

Forest kept pushing after half-time but seemed to lack belief they could salvage the situation.

Gibbs-White wasted their best chance before he made an untimely exit 18 minutes from time with what appeared to be an injury judging by his obvious disappointment and walk straight down the tunnel.