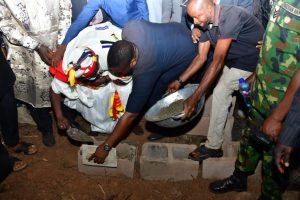 THE National Drug Law Enforcement Agency (NDLEA) has urged traditional, religious and community leaders to champion the campaign against substance abuse and illicit drug trafficking in their communities.

Retired Brig.-Gen. Buba Marwa, the Chairman, NDLEA made the call in a statement on Tuesday in Abuja.

The NDLEA boss visited Igumale, Ado Local Government Area of Benue  to perform the ground-breaking ceremony of the agency’s area command office in the community.

The foundation laying ceremony and the commissioning of a 20-kilometre road was facilitated by the member, representing Ado-Ogbadigbo-Okpokwu Federal Constituency in the House of Representatives, Mr Ottah Agbo.

Marwa urged Igumale traditional ruler, Chief Joseph Ikor to see the siting of an NDLEA office in his domain as a call to mobilise his people.

This, he said was to reject substance abuse and support ongoing efforts to eliminate access to illicit drugs wreaking havocs in families and communities.

”Both developments are signs of the importance of this community and local government to Nigeria’s welfare,” he said.

Marwa said that the command was also a testament that Igumale community was not left out of the dividends of democracy by its leaders..

He commended Agbo, also the Chairman, House Committee on Narcotic Drugs for his passion and commitment to efforts to make Nigeria a drug-free country.

He said the lawmaker was about making history with his sponsorship of a bill to make political office seekers take the Dug Integrity Test, from councillorship to the highest office in the country.

“At the same time, he has also been one of the key drivers of the amendment of the NDLEA Act which we hope will be passed before the end of the ninth National Assembly.

“Even as he worked on the national stage, he also remains an embodiment of the saying that “charity begins at home, “he said.

Marwa admonished the community and appealed to the good people of the constituency to do their best to ensure they keep the communities clean of illicit drugs. (NAN)