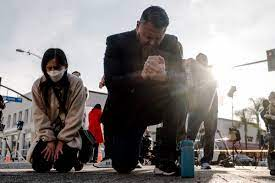 Investigators however scrambled to discover why a 72-year-old gunman opened fire in a California dance hall popular with older patrons and killed 10 people before fatally turning a gun on himself hours later.

Officials worked into Monday trying to identify the 10 people he killed on Saturday night at the Star Ballroom Dance Studio in Monterey Park, about 7 miles (11 km) east of downtown Los Angeles.

Another 10 people were wounded and seven remained hospitalized as of late Sunday.

According to Luna, Tran’s rampage could have been far worse as about 20 minutes after the shooting in Monterey Park, he entered another dance club in the neighboring city of Alhambra.

“There, two patrons wrestled a weapon away from the septuagenarian before he could get a shot off. Tran then fled.

“I can tell you that the suspect walked in there, probably with the intent to kill more people, and two brave community members decided they were going to jump into action and disarm him.’’

Luna explained that about 12 hours later, police officers in the city of Torrance, 20 miles southwest of Monterey Park, approached a white cargo van Tran was driving. As officers neared the van, they heard a single gunshot from inside when Tran killed himself.

Luna did not identify any of the victims but said the five men and five women appeared to be in their 50s, 60s and beyond.

The sheriff said the pistol Tran used was likely illegal in California, where state laws ban any magazine holding more than 10 rounds.

The shooting took place around the location of a two-day Chinese Lunar New Year celebration where many downtown streets are closed for festivities that draw thousands of people from across Southern California.

As news about the shooting spread, some in the tight-knit community of Monterey Park feared it was a hate crime targeting Asians.

The city has for decades been a destination for immigrants from China. Around 65 per cent of its residents are Asian, according to U.S. Census data.

Chester Chong, chairman of the Chinese Chamber of Commerce of Los Angeles, described the city of about 60,000 people as a quiet, peaceful, beautiful place where everybody knows each other and helps each other.

“People were calling me last night, they were scared this was a hate crime,” Chong said at the scene.

The gunshots were mistaken for some New Year fireworks, according to Tiffany Chiu, 30, who was celebrating at her parents’ home near the ballroom.

“A lot of older people live here, it’s usually really quiet. This is not something you expect here.’’ (NAN)