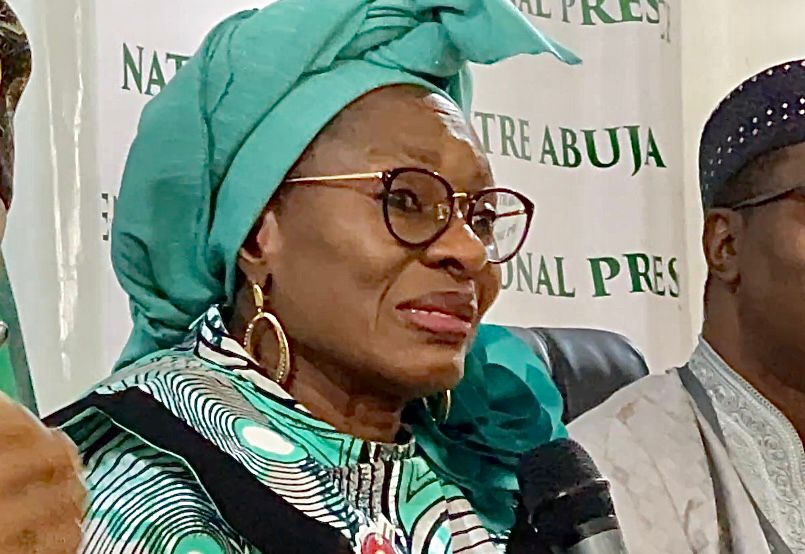 THE Minister of Women Affairs, Paulen Tallen on Monday betrays emotions and wept on live television over continuous captivity of Leah Sharibu and  over 100 other Chibok girls.

The minister’s action took place after presenting the achievements of her ministry at 13th edition of the President Muhammadu Buhari (PMB)’ Administration Scorecard Series (2015-2023) organised by the Ministry of Information and Culture.

The event was transmitted live by the Nigeria Television Authority, Radio Nigeria and Voice of Nigeria.

The News Agency of Nigeria (NAN) reports that Leah Sharibu was abducted by the Islamic terror group, Boko Haram, along with 109 other girls on Feb. 19, 2018.

While the other girls were released, Leah was held back for allegedly refusing to abandon her faith.

NAN also reports that about 100 girls are yet to be released of the 276 female students kidnapped  in April 2014 by Boko Haram terrorists from Government Girls Secondary School, Chibok, Borno state.

Responding to a question on what the government was doing to ensure the release of the girls from captivity Tallen said President Muhammadu Buhari, the military and her ministry had never rested on their oars to ensure their freedom.

“If you come to my office, you will see photographs of where I have visited Leah Sharibu’s parents and I have reached out to support them.

“Anything I put forward to Mr President’s desk,concerning them, he approves.

“You can also see in one of the photographs the helicopter and the security personnel Mr President approved for me to go to Chibok and I have gone there three times.

“Leah Sharibu’s parents are not in Chibok but the military made arrangements for me to see them at the Airforce Base in Yola due to security concern” she said.

The minister reiterated that the President was not unmindful of what the girls were going through at the moment  and the government was doing all it could do to secure their release.

She, however, advised that all hands must be on deck because security issue is not just the government affairs but for everyone.

“Security issue is everybody’s issue therefore when you see something you say something.

“I pray that Nigerians will be sincere enough to support our security with the right information for us to get these girls,” she said.

NAN reports that at this point the minister who could not hold her tears wept as she continued, “I am touched as a mother and I know that this is a season that we should show love at everyone including those in captivity.

“Our prayers are with them and I know that very soon God will release these children,”  Tallen said. (NAN)