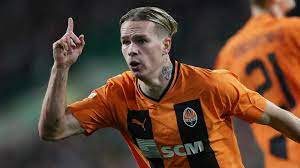 This has come a day after they received a record transfer fee for winger Mykhailo Mudryk from English Premier League (EPL) club Chelsea.

Akhmetov added that Shakhtar Donetsk would play a friendly against Chelsea at their Donbass Arena in “a Ukrainian Donetsk”.

Following the transfer of Mudryk to Chelsea on Sunday, Shakhtar Donetsk said they would receive 70 million euros (76 million dollars) for the player.

The club said another 30 million euros was envisaged as a bonus payment.

It added that the money was a transfer record for Shakhtar Donetsk and Ukrainian football.

Akhmetov said the money would be allocated as part of a project titled ‘Heart of Azovstal,’ aimed at “helping Mariupol defenders and the families of fallen soldiers”.

Ukrainian forces defending Mariupol were holed up in the Azovstal steelworks for weeks as Russian forces tried to capture the city.

The Ukrainian soldiers eventually surrendered in May last year.

“I am allocating 25 million dollars today to help our soldiers, defenders, and their families,” Akhmetov said in a statement on the club’s website.

“The money will be used to cover different needs —- from providing medical and prosthetic treatment and psychological support to meeting specific requests.

“To ensure transparency, the project will have a professional independent team that will be in touch with the Azovstal defenders, their families, care providers, and volunteers.”

He put the club up for sale following Russia’s invasion of Ukraine, before it was acquired by a group led by Todd Boehly and Clearlake Capital.(Reuters/NAN)