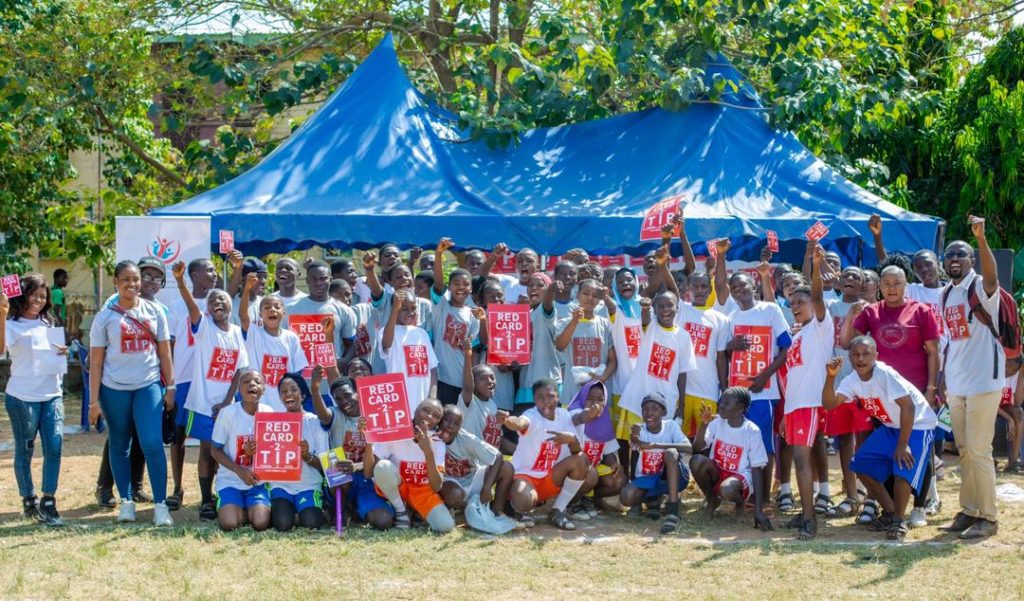 THE DEVATOP Centre for Africa Development has empowered secondary students with the requisite knowledge to fight against human trafficking and abuses using sports.

Mr Emmanuel Obiabo, Programmes of the centre said, ‘the Red Card to Human Trafficking Sports Competition’ was organised by the centre in partnership with the National Agency for the Prohibition of Trafficking in Persons (NAPTIP).

Obiabo said the event, which was aimed at creating awareness on the event which was supported by Accion Contra la Trata and Pamplona City Council of Spain was to raise awareness on issues of trafficking .

He said that the event was also aimed at empowering secondary students on the issue of Gender Based Violence(GBV).

Obiabo said|: “We targeted young people because they have peers and interact among themselves, so we see that if we raise their consciousness, raise their level of understanding of these issues, it will reduce their vulnerability.

“Another thing to do is to also help them to speak up against human trafficking and abuses around their communities and engage.

“This is because, if they are informed about how this takes place, they will easily know the red flags.

“More so, it is because students have a sphere of influence, they reside in communities and have friends, so we believe that once this message is told to them, it will cascade into other members of the society.”

Obiabo said DEVATOP used sports to drive home the message, adding, ”because it is a unifying factor and people are aware if its techniques, like, red card, yellow card, penalty medals, awards and so on .”

According to him, giving a red card to trafficking simply means trafficking in persons is not what we should have, as such should be eliminated.

Obiabo said the red card to human trafficking sports competition activity was organised under the project called  ‘Talk am Against Trafficking and Abuse‘, which also means ‘speak up’.

Ms Jessica Arikpo, Chief Intelligence Officer, NAPTIP, said there was need for the students to first understand the key elements in trafficking in persons which included the act, the means and the purpose.

“The act of trafficking has to do with recruitment and how it is done, the means talks about the use of force or deceit, while the purpose deals with what the traffickers will be using them for.

“Most times, children are coerced into being trafficked without knowing it ,they use them for various purposes and we have internal and external trafficking, internal trafficking happens within the shores of Nigeria, while external is abroad .

“Human trafficking is said to be a lucrative business in Nigeria after arms and drug trafficking, our girls and our boys are taken away to other countries for Labour, exploitation, or sex trafficking.

“However, mostly in Nigeria, they are used for domestic servitude, this is wrong and NAPTIP has been mandated to stop it through various Acts like the prohibition Act, Child Rights Act among others,’’ she said.

Arikpo said now that the students have been empowered with the knowledge on trafficking and abuse, they should be alert to notice such acts and report them to trusted adults around them.

Kote, therefore, urged the students to learn to speak out whenever they found themselves in any compromising circumstance or any form of abuse or violations, adding, ”this should be done even if they are not directly involved.

“You should talk to your teachers, your guardians and counselors, talk to your principal or any elder that you can confide in.

“Make sure you say something, don’t keep things to yourself, look out for each other and talk whenever they are in danger,’’ she said.