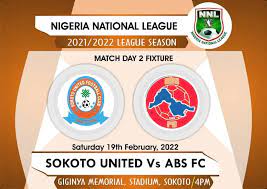 The News Agency of Nigeria (NAN) reports that the two sides put up a display that showed they are match rusty after a long break since an NNL match was last played.

The encounter decided at the Kwara Stadium Complex, Ilorin, saw the hosts dominated occasionally while Sokoto United checked with their counterattack tactics.

ABS goalkeeper, Nasir Toheeb, made a vital save in the 7th minute to deny the visitors, stopping what would have ended to be an own goal.

ABS youngster, Ayoku AbdulRahman, had the game’s finest opportunity in the 23rd minute when he followed a rebound, hit the effort with his outside but the chance was deflected for a corner kick.

The game, which ended goalless at the break, started from where it stopped in the first half but it was ABS which called Sokoto United goalkeeper, Abine George, into action through a fine header by the hosts’ captain, Ibrahim Muhammed.

Ayoku AbdulRahman scored for ABS in the 68th minute after a fine run down the right flank, who made a nice cross inside the visitors’ box for the goal.

The lead only lasted five minutes as Ajiji Gimba nodded the equaliser to silence the ABS supporters who were in anguish as their team conceded the goal.

From then, the game began from end to end and both sides defended with everything to ensure points are shared.

It was the last home match for ABS as they travel to Damaturu to lock horns with Yobe Desert Stars in the last match of the season on Saturday. (NAN)