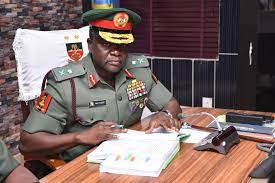 THE Commandant of the Nigerian Defence Academy (NDA), Maj.-Gen. Ibrahim Yusuf, has said that the institution had received more than N8.2 billion support from the Tertiary Education Trust Fund (TETFUND) in the last seven years.

Yusuf said this during the inauguration of some TETFUND intervention projects at the institution on Tuesday in Kaduna.

The News Agency of Nigeria (NAN) reports that the projects include a CBT Hall, Faculty of Management and Military Science buildings.

Yusuf explained that about N6 billion of the money went into infrastructural development while N2.2 billion was spent on training, research and publication, library and ICT, among others.

The Commandant added that the Federal Government had also invested hugely in manpower development of cadets, “which

by implication goes to the development of the entire Armed Forces of Nigeria”.

Yusuf disclosed that the NDA currently has nine ongoing TETFUND projects from the merged funds for 2019 to 2022 interventions.

He said that among the nine projects was 800 rooms accommodation for cadets, which would be ready in 30 days.

Yusuf said other projects include the furnishing of the hostel, supply of equipments for the faculty of engineering and e-learning, as well as the construction of psychology and supply and chain management departments.

He thanked President Muhammadu Buhari for investing alot in the academy, and the TETFUND  for their understanding and support throughout the years.

He said that the projects would in no small measure further enhance teaching and learning and raise academic standards in the academy.

He reiterated that education remains an integral part of the administration’s agenda.

competitive for economic and technological development of the country.

“It is on record that through the support of the Federal Government, TETFund has performed exceptionally in the provision of physical infrastructure, support for academic staff training and development.

“They have also done so well in book publications, ICT, research and development amongst others in public tertiary educational institutions across the country,” he said.

In his remarks, the  Executive Secretary of TETFund, Sonny Echono, said the event marked the start of a major TETFund activity in 2023.

Echono, represented by Olatunde Olajide, said that in 2023, 162 iconic TETFund projects would be inaugurated in 54 tertiary institutions spread across 28 states.

He said that the financing of the projects by TETFund was a clear demonstration of Federal Government’s commitment to the provision of requisite physical infrastructure in the nation’s public tertiary institutions.

“It is our commitment at TETFund to ensure that value is obtained for funds allocated to the benefitting institutions to aid teaching, learning and research and by implication, make them globally competitive,” he said.

The executive secretary commended the management of the NDA for successfully completing the three projects among other notable ones being executed in the Academy with TETFund support.

He expressed confidence that the intervention would significantly impact the training of Cadets, through teaching, and research.

He further commended the NDA management for ensuring quality delivery and adherence to specifications of the projects, in spite of the volatility in the economy.

Ochono enjoined them to ensure proper maintenance of the structures to avoid early dilapidation in view of limited resources to reconstruct new ones, while reassuring them of TETFund’s continued support.

under the categories of the Annual and Zonal interventions of TETFund and were executed at the cost of N679 million.